A Letter From Tom Console – A Very Special Offer for My Preferred Customers!

“I’m deeply appreciative of your confidence in my products, and now I want to do something for you…. Dick Johnson’s Money-Machine is the best Paper & Pencil Method I have ever used, including my own.  Get it at a very special price!”

»»And, we are going to include a boatload of First-Rate Dick Johnson systems for FREE!!!! ”

Thank You for your patronage over the years.

Many of you have purchased my products, from my original ‘TrueTenders’ to my FG Method!  to my various software packages.. I sincerely appreciate your business and all the great letters and e-mails.

It really is a good feeling when your customers show the kind of confidence in my products that you have.

And now I want to do something for you.

When I was at the Caesar’s racebook in Las Vegas a few months back, I met with Dick Johnson, who I have worked with before on a couple of projects, including his excellent ‘Wildcards & Longshots’ selection method.

He told me about a method he had basically kept to himself for years, and now that he was ready to retire (he just turned 60), he had decided to publish it.

Since he, Dave Powers and I had loved his other stuff, he came to us first. In the course of our conversation, I discovered that he had a system of play he had used for years and had finally decided to have it published.

As it turns out, David Powers, who as you know handles all my products, was also publishing his.

Dick told me he had been earning a nice living for years strictly off playing this system.

He actually supplements his income from this system with his other methods, The 20/20 Sureshot, Trainer/Speed Equation, etc.,

but told me straight out that he would be going strictly with the new system upon retirement.

And get this, since he lives in ‘Vegas, he goes to the Orleans Hotel every morning, puts in all his bets ahead of time, and then hits the golf course!

I jokingly asked him: ‘What exactly are you retiring ‘from’, Dick!  Sounds like you are already there!’

And he told me he was basically retiring from the system-writing business, which was very time consuming.  From now on it would be just betting the horses and golf.

His system is called The Horseplayer’s Money Machine, and though I consider myself a very good system writer, I’ve got to admit that what I saw here blew me away! 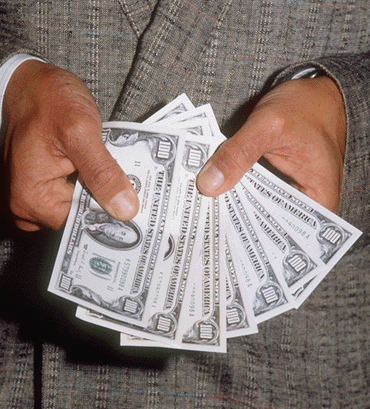 Only rarely did an HMM top pick not at least run 3rd.

And, boxing the top-rated horses in the Exacta and top five horses in the Trifecta produced payoff after payoff.  One of the Tri’s, in fact, came back at $1,422!

Now you’re probably saying, sure, Tom, a way to profit consistently from the racetrack — how many times have I heard that before!

Well, lots of times, I’m sure.  But I hope by now that you know me.  You know that you only hear from me when I feel something truly genuine comes along.

I get requests in the mail, several every month, asking me to endorse a product.

But I’ll only endorse it if the author’s claims prove true, and since I have my own testing database now, I know how honest the writer is in a jiffy.

You want to know many of the claims from the systems I get actually turn out to be genuine?  About 1 in 14, and that’s why you don’t see my name associated with that many products.

And how did Dick’s HMM check out?  Well, check this out!:

You hear about people getting rich in the stock market by holding onto stocks that increase 1,000% or more in just a few months.

Well, you don’t need the stock market when you can get returns like this!

Each and every track tested showed good, solid, consistent profits.  The Money Machine is very aptly named!  I used a 3%-of-bankroll money-management plan.

“The Horseplayer’s Money Machine is designed to provide the player with a quick, simple, reliable mechanical method for consistently making profits at the racetrack.

When I say ‘mechanical’, I mean that you just follow a step-by-step procedure and don’t have to worry about agonizing over every detail in the Racing Form.

Now you can play like the Pro’s.  Or, if you already are one, you can add this to your arsenal of money-making methods!”

I’ll tell you something folks, HMM should probably retail for $199.95.  It’s that good!

But like I said, I wanted to do something nice for you, so I talked Jeff into letting me sell it to you for just $55.

√ OK, but the ‘nice’ part is just beginning.  Here’s the deal:  When you purchase Dick’s Horsplayer’s Money Machine,

I am also going to include — get this — 6 additional Dick Johnson Systems — his life’s work, in otherwords!  You are also going to get:

√Oh, and if you order within 17 days, you will also receive Dick’s exotics blockbuster:

So, seriously, this is a great opportunity for you to get roughly $517 (retail) of

methodologies from one of the best system-writers of all time for just about 10% of that price.

It’s a great deal, and if for some odd reason you don’t find anything you like among this vast array of Professional handicapping knowledge,

just return it for a full refund.

You are going to love this stuff, trust me.  Email me with any questions. Just go to the website and put ‘attention Tom’ at the top of the message. Thanks and Enjoy!! Tom