The BK Secret, The Software! 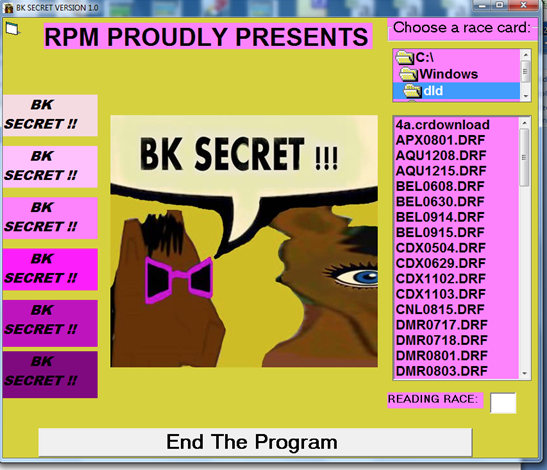 He had an arsenal of angles, most of them spot-plays, all that showed long term profits.  He would go out to the track daily and never make a play unless a horse fit one of his angles to a ‘t’.  He wasn’t interested in ‘action’ — he was interested in making money.

And make money he did, lots of it, over his 30-or so year career.

>>The interesting thing about Bud is that he didn’t come up with any of his winning angles on his own.  He instead could be called a ‘collector’, because starting years ago, that’s exactly what he did; collected angles from fellow professionals. His intention, initially, was to compile 15 winning angles from 15 winning pro’s.  He was a lively, likable fellow and knew who the guys were who were making good money from the ponies.

He would befriend these fellows, explain about his concept for a book filled with profitable angles and ask if they would like to participate in the publication by revealing one or more of their favorite winning methods.  While he was often turned down, he nonetheless did reach his 15-angle goal (we’ve included 10 of them in the BK Secret), sometime in the early 1990’s.  He had every angle, written out longhand, tucked away in the satchel he carried to the track daily, and had purchased a new word processor to put everything in readable, and hopefully, publishable form. In the meantime, though, he had been putting the angles to his personal use, and with extremely good results.

We ran across Bud in the summer at Del Mar.  When he learned that we were in the handicapping book publishing business, his eyes lit up.  ‘I’ve got a book you can publish’, he said excitedly, ‘and I think it’s probably better than anything else out there!’ He told us the story about collecting winning angles from pro players.  ‘I never got around to writing the book,’ he told us, ‘but I’m getting up there in years now, and though the track has been good to me I wouldn’t mind a few extra bucks coming in as royalties.’

>>We only had to peruse a few of them to realize that what we were looking at was seriously good stuff.! The angles, overall, were very easy to figure — a couple only required a few seconds to locate plays on an entire race-card.  A couple were very familiar to us, as they were angles very similar to ones we had been using profitably for years.

‘You know what we’re holding here?’ I said to my partner, Tom (Console).   ‘A booklet that any player, regardless of his level of sophistication, can take to the track and make money.  Now why didn’t we have one of these back when we started out!’

‘Because we did it the hard way,’ Tom responded, ‘and tried to figure out how to win all by ourselves.  Bud just cozied-up to these guys and came away with a real goldmine.  Oh well, no one says we can’t start using them now.’

And that we did.  Our philosophy has been that the winning player can never have enough good, solid spot plays.  Angles that you can confidently use year after year, decade after decade, and know that they’re going to turn a profit for you.

>>>So what we have is consolidate all of Bert’s Angles into one Powerful Consensus Software Program that, overall, picks an even higher % of winners than any of the individual angles on their own. <<<

Remember, some of the most successful players in the game are Angle Players.  Some have just one angle they’ve stuck with for years, while others have several angles they pull from.  BK Secret! has several profitable angles rolled into one!

With a win rate approaching 36% and a Positive ROI of 41%, plus frequent big prices and a great Exacta/Trifecta hit rate, BK Secret belongs in your handicapping portfolio.  And it works on all types of tracks, all levels, and on all surfaces.  In fact, it had a great couple of days on the toughest of all races to handicap, The Breeders’ Cup.  11 Winners from the 22 races – multiple place & show cash-ins – several Exactas/Trifectas, including payoffs of $518, $360, $160 & $77.  See summary results below. 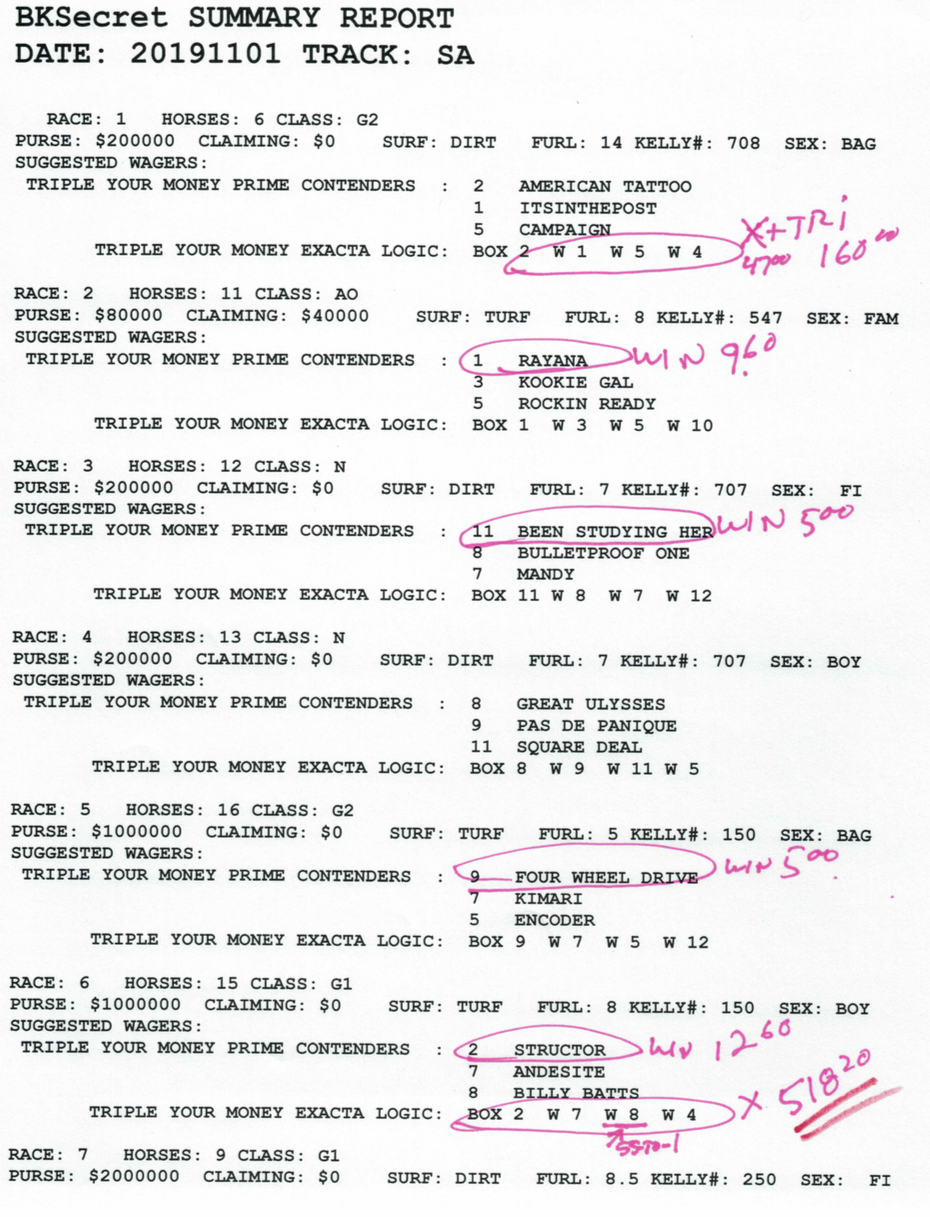 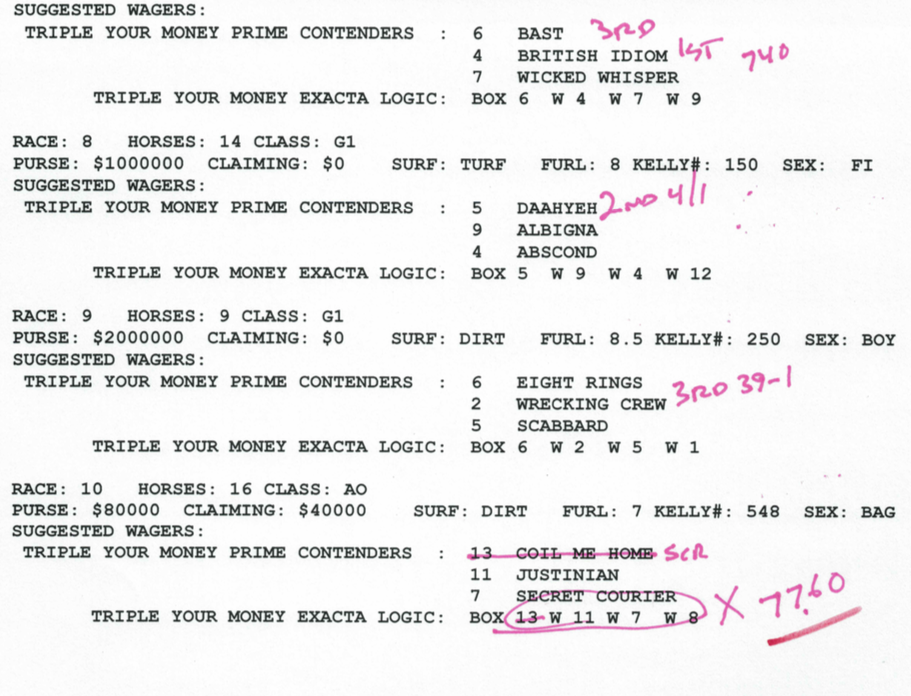 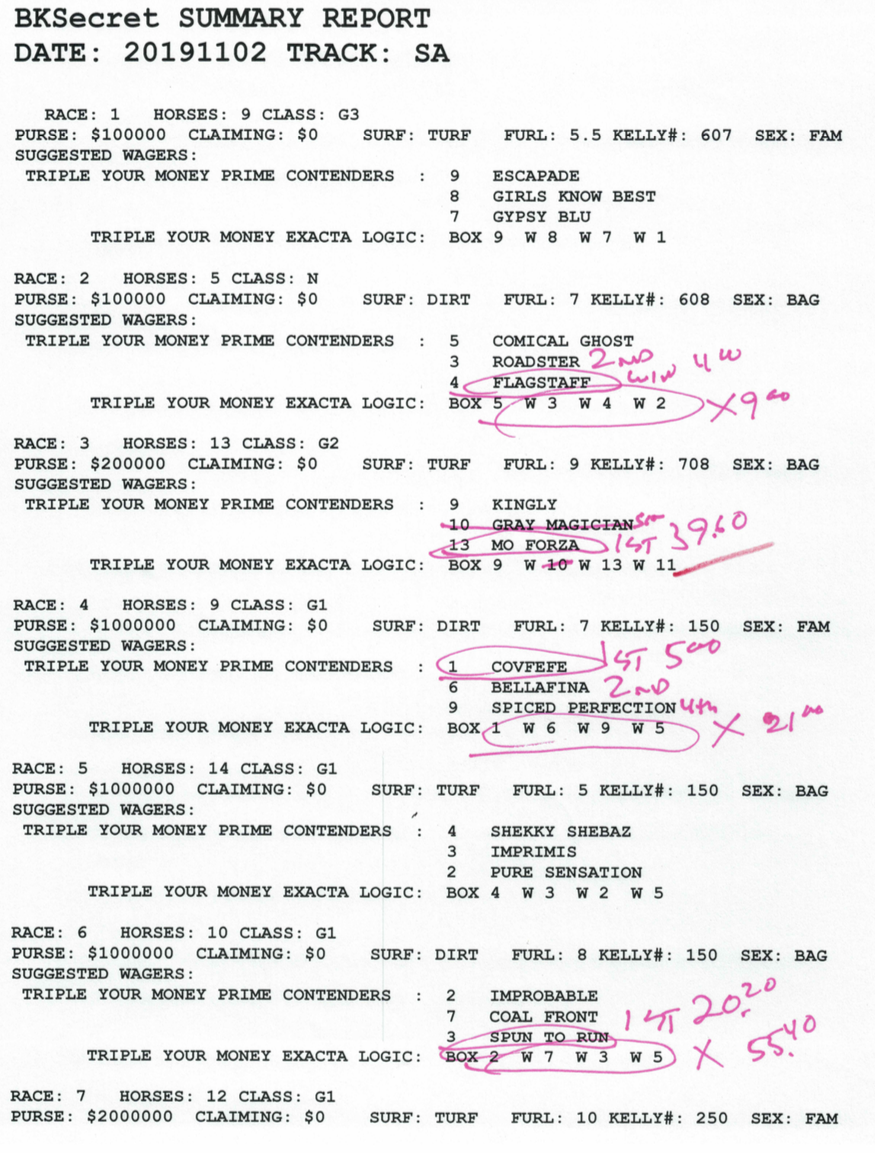 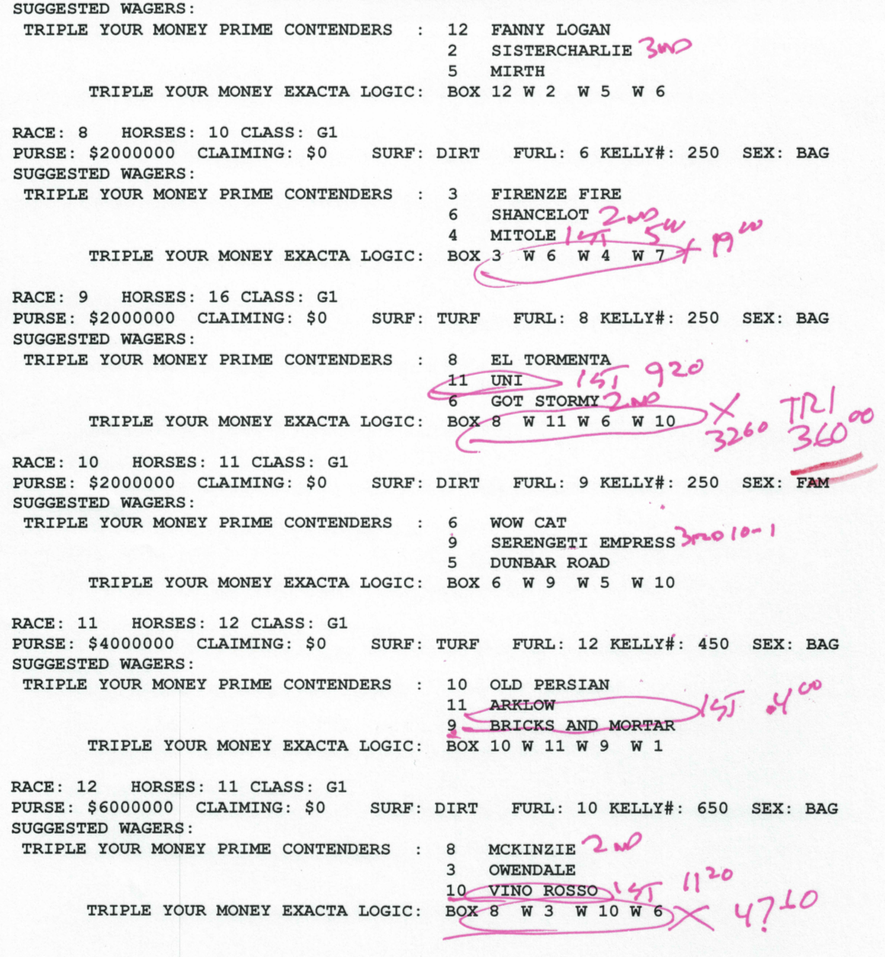 Screen Shots Below:  BK is perhaps the best overall contender selector we have seen in quite some time.  The Betting Guide, which comes with the software, explains which horse(s) are the best bets and how to play them for maximum profit efficiency. 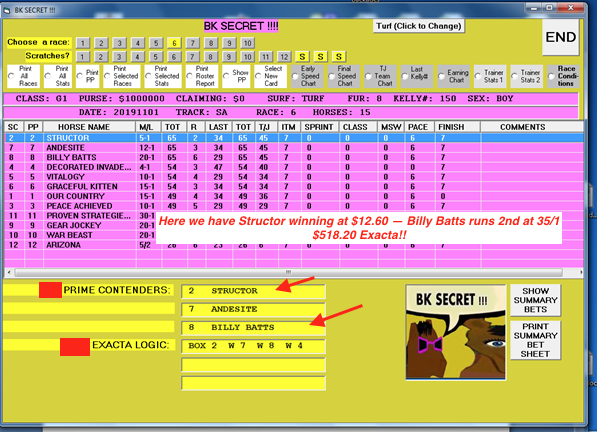 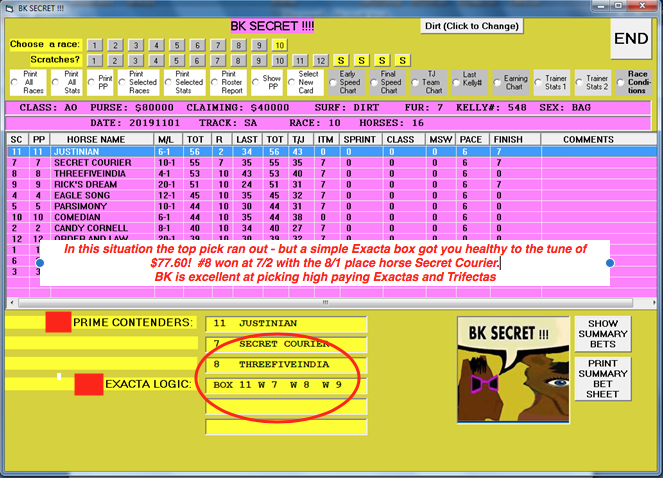 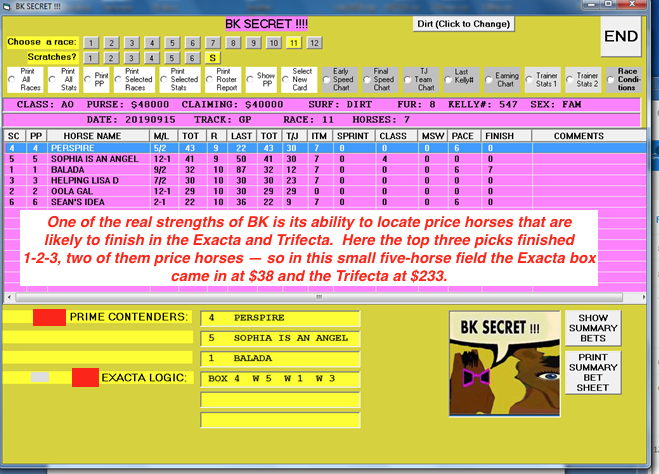 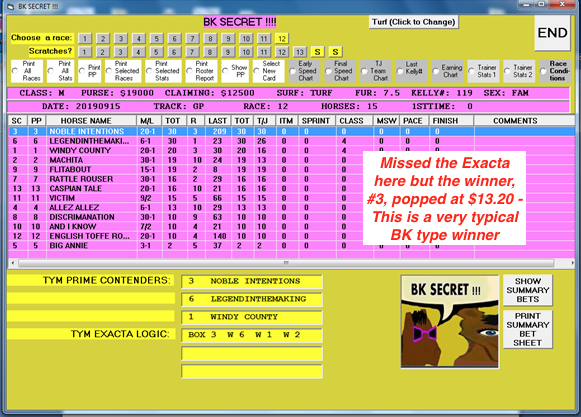 If you really, truly want to make a profit at this game, face the reality that it isn’t all a bed of roses.  But if you are persistent, and don’t cuss out the jock or trainer or system-writer, or whoever, every time your horse runs up the track, then you have a darned good chance of pocketing some extra cash.

And The BK Secret! will help you do just that!  Superb Consistency combined with Solid Payoffs.

And we’ve made the price affordable to everybody, just $97.50, complete – and that price also includes all the original paper angles!

This is a Rare Opportunity to Own, Use & Profit From Angles that Real Professionals use to make REAL PROFITS! Enjoy the satisfaction of owning a super-powerful arsenal of spot-play angles that are neatly melded into one Consensus Selection System that will keep your bottom line in the black racing season after racing season.

These are time-tested, professional angles, all extremely quick to figure, that will have you marching up to the cashier’s windows over and over again.

>>>P.S. – we will also soon be introducing two other great products, The Peter Dallas Experience – Professional Handicapping at its Best!, and The Pops & Tips Exacta/Trifecta Module!
The Peter Dallas software will retail for $128 and the Pops & Tips $74.50, but if you purchase all 3, your price is just $199, a $101 savings!
Check out the Web Details here__