Why, when you are using Jack Otts’ — 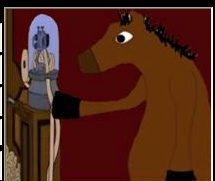 +++Special BONUS:  For those of you into the Stock Market, Jack Otts’ 35 Highest Percentage Breakout Stock possibilities for the second half of 2015!

Editor’s Note:  As you know we strive continuously to provide our customers (and ourselves!) with innovative software and systems that will provide a decided edge at the racetrack. For every system/software we publish there are 20 or more that we review that we don’t simply because they do not measure up.  Well, we’ve got a real beaut for you this time.  An amazingly accurate, price-getting methodology/software designed by a successful stock trader who is also a very successful horseplayer.

>>Jack Otts has literally taken his ‘break-out’ stock theory and translated it to the horses – and it works like a charm.<<

Check out the info below — seriously, it pretty much blew us away.

And, though I personally am not into ‘stocks’, some of our partners are, and Jack, who has been a customer of ours for a long time, is offering our subscribers his 35 best break-out stock candidates for the remainder of the year.  You really can’t lose on this deal.  The one caution is that we are restricted to selling just 150 software programs, so do get in touch soon if you are interested.  Dave

A Special Offer for Long-Time Customers!

>>The author’s theory is based on ‘break-out’ stocks, which he has translated into >>‘break-out’ horses.

In otherwords, in the stock market smart technicians look for stocks that may be ready to ‘break out’, i.e., jump to the upside in price based on proven patterns.

Jack Otts, the author of the Race Probability Module, explains that there are ‘break-out’ horses as well, patterns hiding in the past performance lines, that the software (or paper and pencil version) will spot, and the payoffs are often enormous.

While a stock, bond or commodity may show a ‘building’ pattern over several months or longer before the breakout occurs —

things happen much, much quicker in this game since the time frame is condensed down to weeks or even just days.

>>>When played as instructed, the player will catch close to 70% of all longshot payoffs at a given track.

*****This is a ‘heads-up’ offering, so to speak, which is initially being sent to just our long-time customers.*****

so they will likely go quickly.  Thanks, Dave

Jack lives in New York City where he began working for a major stock trading firm in the late 1970s.  He was one of the first ‘experts’ in the field of ‘computer stock trading’ since he had a knack for programming these trades long before most other traders even knew what a computer was.  He later started his own stock trading firm and developed theories that made his specialty — ‘break out’ stocks — a very lucrative business venture for him and his partners.

A lifelong fan of the Sport of Kings as well, Jack realized that horses acted much like stocks — ‘I call them four-legged stock certificates’! Jack jokes.  He developed a version of the Race Probability Module in the mid-90’s and has been perfecting it ever since.  His biggest score?  ‘I used the Module to hit a $112,563 Superfecta at the Breeders Cup once – my ticket was just $96.’

Below you will see how the Race Probability Module screen is laid out.  Exacta/Trifecta boxes are suggested in the boxes at the bottom even when there is no horse named in the BET 1 box.  The bottom box lists the ‘Breakout Candidates’ based on Jack Otts’ theory and programming.  As you can see here in the race below, the Breakout Candidates had a field day! 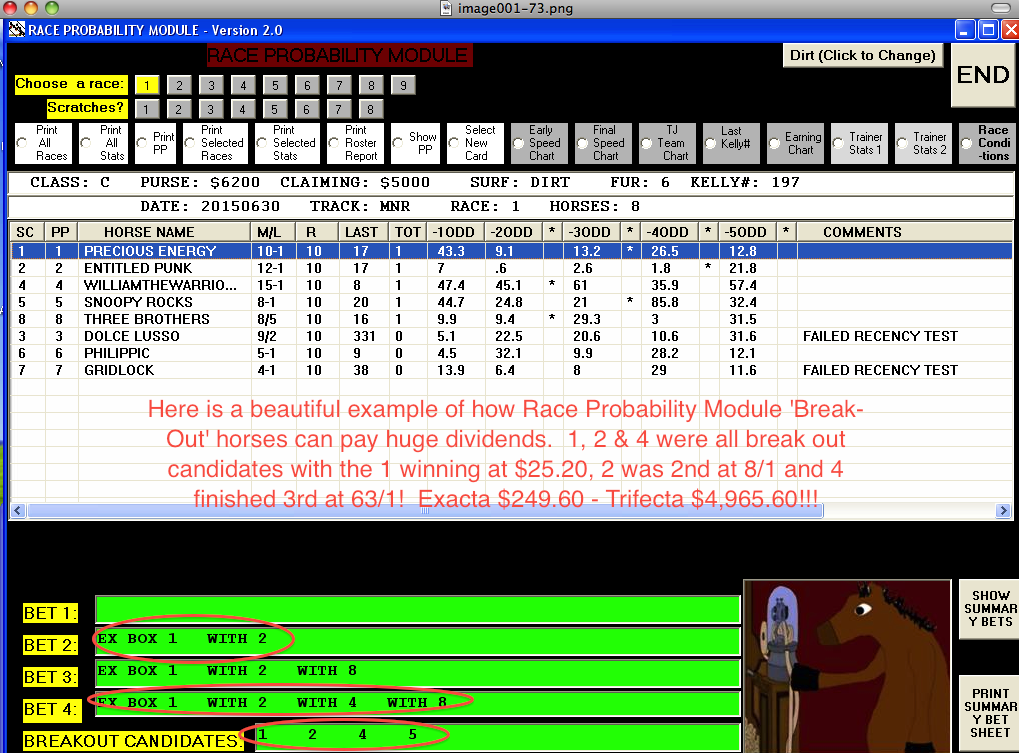 Below:  Scuti De Patuti was a clear Breakout Candidate and paid a nice $13 for the victory.  When a breakout candidate from the bottom box is also listed by name under BET 1, you are looking at a very solid contender. 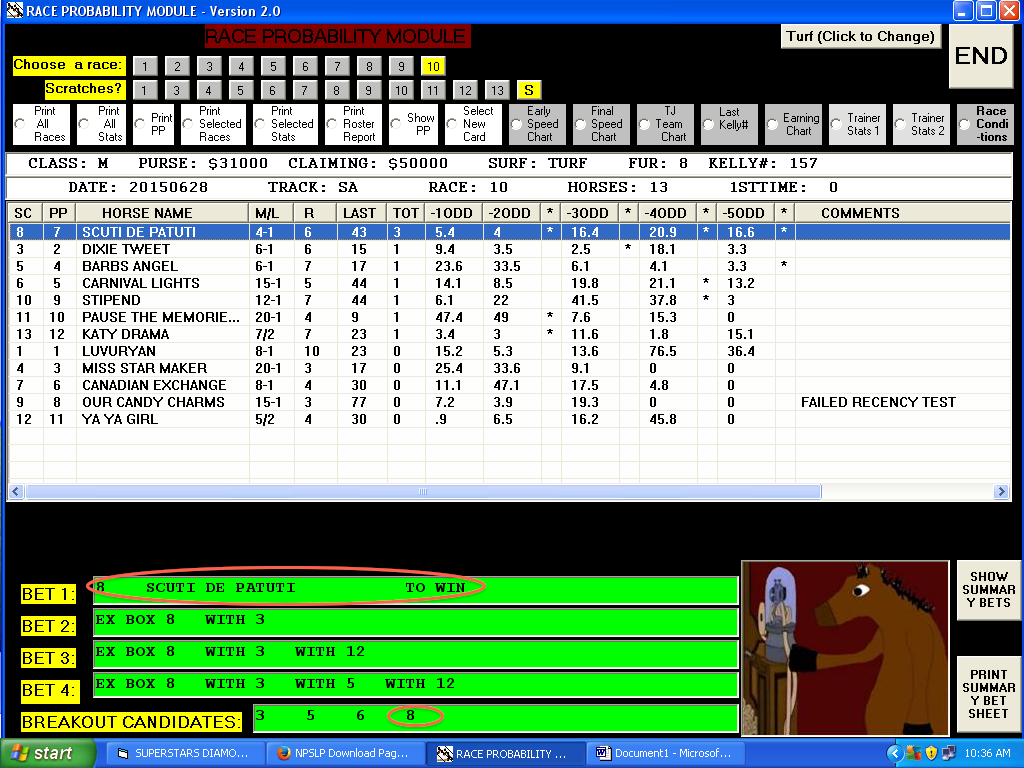 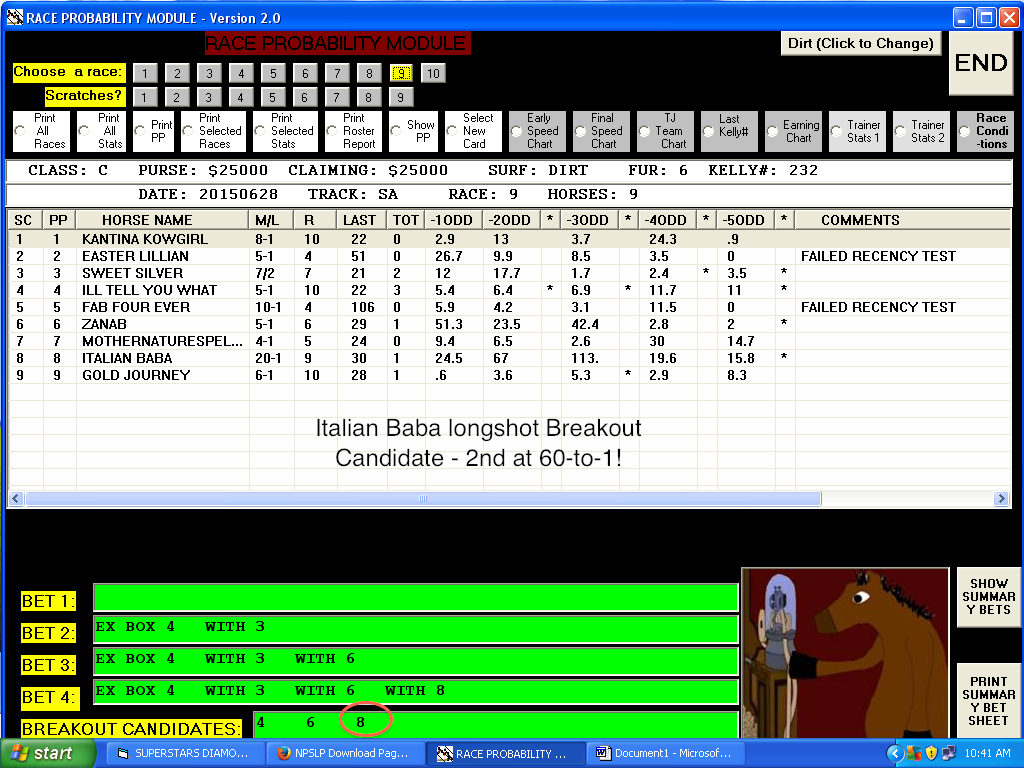 Below Chardonnay Sherry is the only Breakout Candidate listed — she led all the way only to tire to 2nd in the final strides.  $68.40 to place and $25.60 to show. 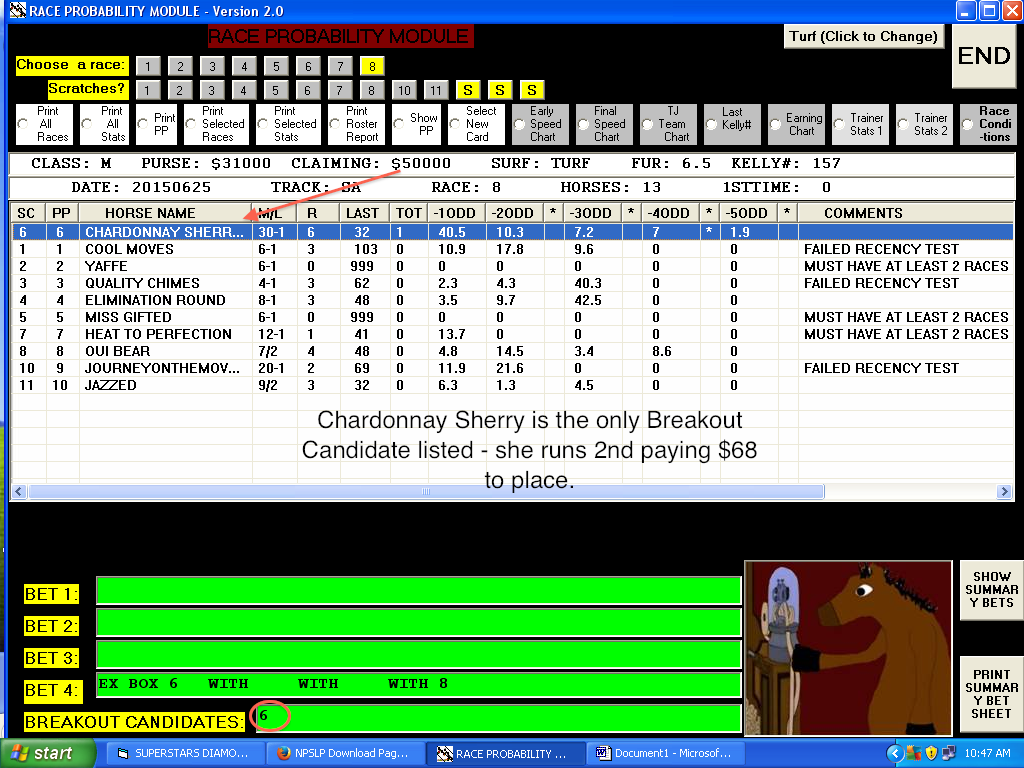 Now, lest you think that the RPM is just for picking longshots, that is not the case.  Here you see a situation where it nailed the win, place and Exacta in a short, very wide-open field. 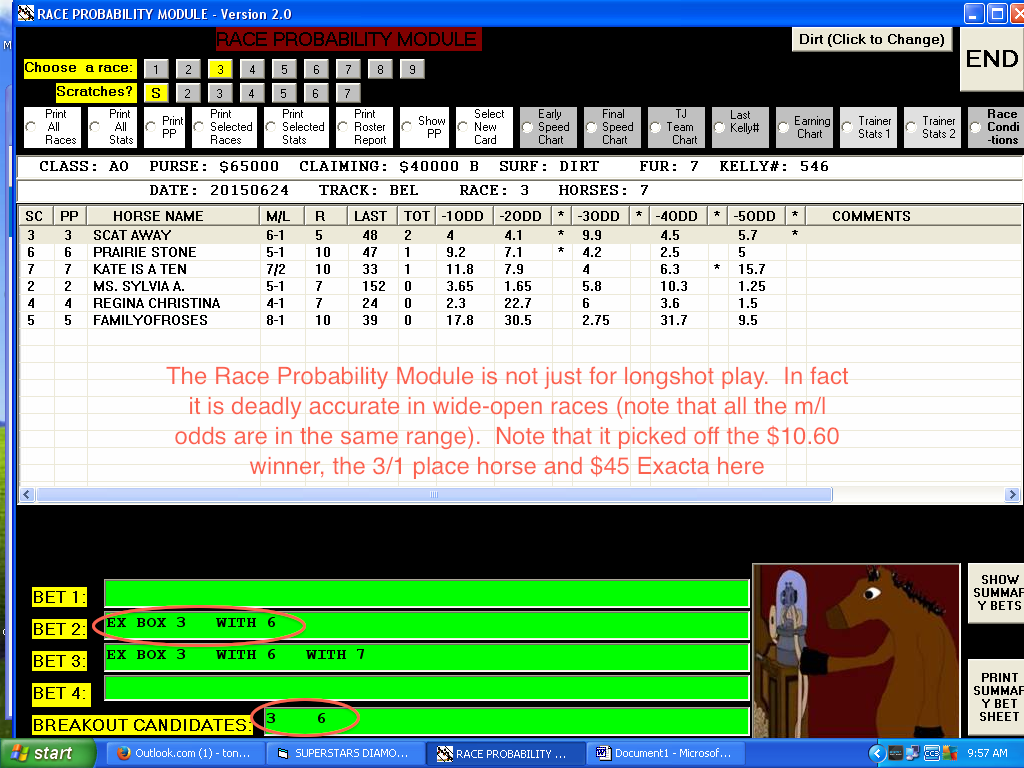 And below you see another beautiful example of how often Breakout Candidates totally reverse form and run big.  The BO Candidates finished 2nd, 3rd and 4th, all at huge odds, and combined with the winning favorites the program caught the Exacta, Trifecta and Superfecta. 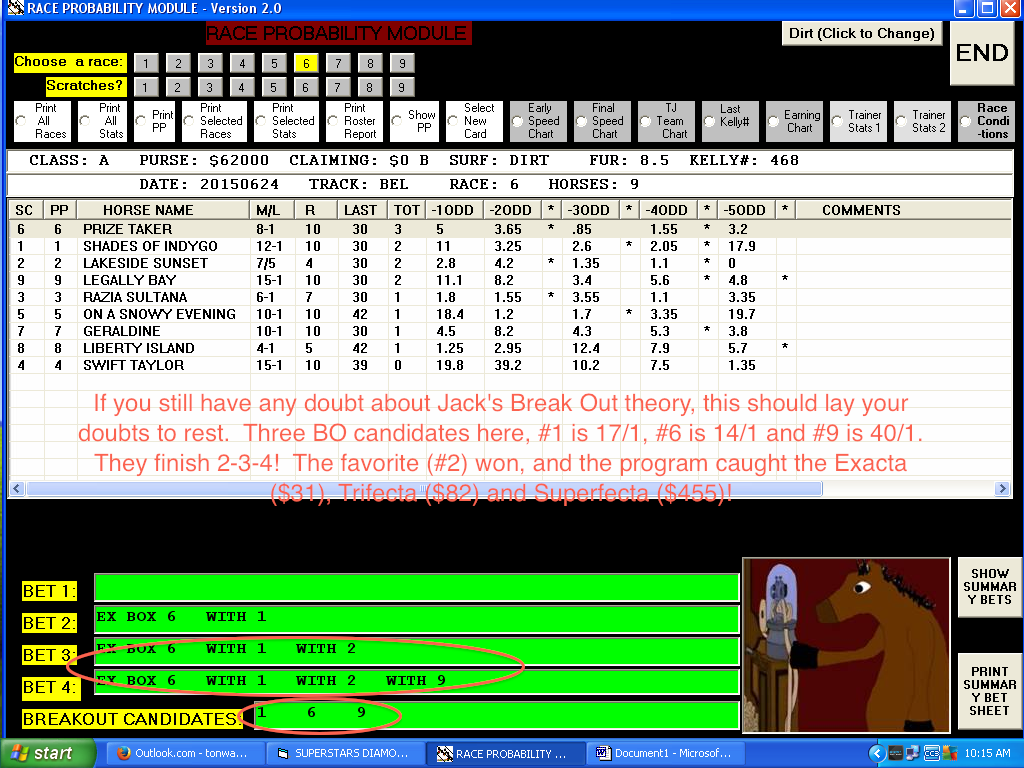 So Hurray, Hurray, Hurray, as the barker at the carnival says, but no clowning around here –  the Race Probability Module will add a new dimension to your handicapping and, again, …. only 150 will be sold!

>>>AND …. Don’t forget Jack’s great BONUS OFFER!— he will send you the names of 35 stocks that have serious break-out potential during the second half of 2015!  We asked Jack about his accuracy with his break-out stock predictions.  ‘Based on my track record, I can almost guarantee that 65%+ of those names will see major gains by year-end.’  Good enough for us!

Call us if you have any questions.  Thanks, Dave