A Previously Unpublished System of Play from one of the Game’s Most Ingenious Analysts!

A Previously Unpublished System of Play from one of the Game’s Most Ingenious Analysts!

Since we published the Three is Better Than One system a few weeks ago, which was sent to us by a longtime customer, several other regular clients were inspired to provide us with their own personal methods.

We receive a total of 22 systems/methods immediately after the release of Three is Better Than One, which, by the way, proved immensely popular among purchasers.

Now, I’ve got to tell you, there was some darned good stuff among the offerings, but one method really intrigued us.

It was sent to us by John Dellum of Indianapolis, and was called, simply, ‘The Colonel’s Secret’.

John enclosed a letter explaining that he received the booklet from his father, and that the author was none other than the famous Colonel E.R. Bradley, one of the most famous handicappers in the history of the game.

‘My dad told me this was an unpublished manuscript and to his knowledge only a handful of folks ever laid eyes on it.’ John wrote,

‘And I’ve been using it with great success since the late 1960s. I haven’t seen anything like this in any other system I’ve purchased, ever.’

We looked closely at the manuscript, which was typewritten on an obviously very old machine, and at the end of the written material, just below the last sentence, were the initials ERB.

Well, we did our research, which began by scouring the Internet to 1) determine if, indeed, the material had never been published before and 2) if it had been published, was it still protected by copyright?

But we found no evidence of The Colonel’s Secret ever having seen the light of day among the general public.

And, going over other articles we found by Colonel Bradley, the writing style, and words used (especially ‘darndest’ and ‘crackers’ (referring to a sharp horse), we have little doubt that the author is one and the same.

**Now, many of you may remember, through past racetrack literature, that the good Colonel made a fortune betting the races.

Back in the late 1920’s thru the mid-1940’s, his ability to come up with a steady stream of winning horses was legendary.

He initially pioneered the concept of the ‘fast finish’, where a horse who ran a final fraction (the final 2 furlongs) 24 seconds or less in its prior race had a better than

even-money chance of winning its next race, often at a nice price, since the general public didn’t have a clue about pace, or final fractions, etc.

But in the manuscript we were looking at, which we are now calling ‘The Lost Writings of Colonel E.R. Bradley’, the final fraction is not mentioned.

But the methodology, and wisdom therein, translated into a system of play that produced a high % of win/place horses, a hefty profit —

and we managed to take the data and also create a solid Exacta and Trifecta selections strategy, two types of wagers that were non-existent during the Colonel’s time.

**What we were excited about, of course, were the results.  The methodology is quick and simple.

Runouts were brief and, often, many racecards sported 4 or more winners and 6 or more win/place horses.**

And here’s the interesting thing:

While much of the methodology does involve familiar handicapping pointers and factors, the author uses a couple of rather odd indicators, and it is these indicators that make the difference between a modestly profitable system and a very profitable system.

When you see the system rules you, too, will be wondering what in the heck these factors have to do with picking a winning horse, but when they are left out, the methodology becomes much less effective.

As you well know, we have the luxury of owning a huge database of races, going all the way back to 1999.

This enables us to program and test just about any method, and The Colonel’s Secret was run thru several separate tests, totaling, as mentioned above, @122,000 races, at 35 different racetracks in the U.S. and Canada.

The results listed above were the ‘overall’ results, but several of the ‘subsets’ we tested did even better.

For example, the win % and ROI jumped by close to 3 percentage points when playing spring races for claiming horses between $16,000 and $40,000.

The class level of the track did not seem to matter.  The Colonel’s Secret worked well at all tracks, even lower level tracks like Evangeline and Fairmount.

And, as we mentioned previously, we have designed a solid Exacta and Trifecta strategy that will add to the fun and profits with this method.

”The Colonel’s Secret has nothing to do with fried chicken, but after using the method at the track for a few days, you’ll likely be able to treat everybody in the house to a bucket or two!’’  Tom Console

Some Background on the ‘Colonel’

Testifying before a United States Senate committee in April 1934, Bradley identified himself as a “speculator, raiser of race horses and gambler.”

He made the cover of TIME magazine on May 7, 1934 and in the year 2000, the Florida Department of State honored him as one of their Great Floridians.

Whatever the myths may be, Bradley did in fact become successful as a gambler and eventually established a bookmaking partnership that served horse racing bettors at race tracks in Hot Springs, Arkansas, Memphis, Tennessee and in St. Louis, Missouri where he married local girl, Agnes Cecilia Curry.

He eventually went to Chicago, Illinois where he would own a hotel, and a sports betting operation, and maintain business interests for the remainder of his life.

Bradley also established an equine cemetery where horses each received a marble headstone.

A constant innovator, Bradley introduced the fibre skullcap worn by jockeys and as a racetrack owner made improvements to the starting gates.

Friends and business associates hovered by his side at the racetrack, hoping to get a peek at the Colonel’s race selections.

One associate, well known in financial circles, is quoted as saying: ‘I’ve seen Bradley take home $50,000 or more from the track on several occasions.  If I knew his angles, I’d get out of the banking business tomorrow.  It would be a whole lot more fun and the pay a whole lot better!’

Let’s look at a few examples of the Colonel’s work: 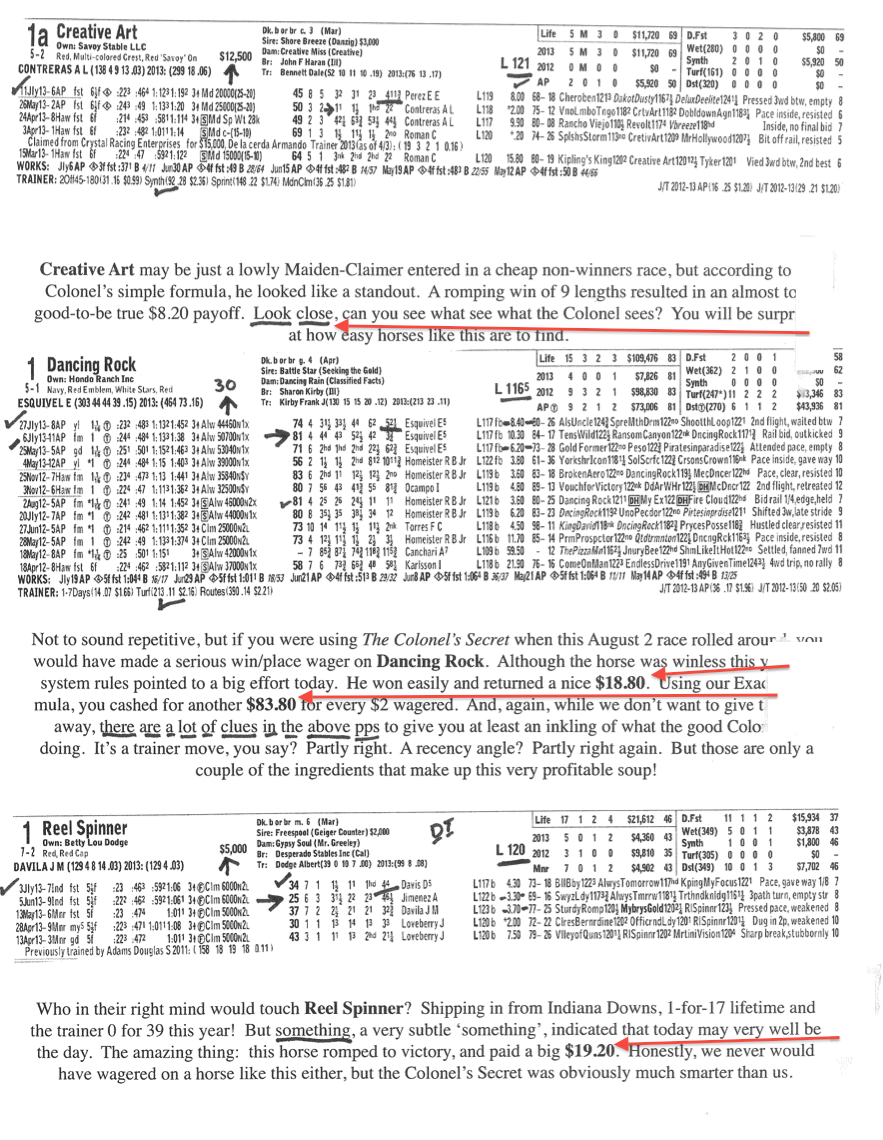 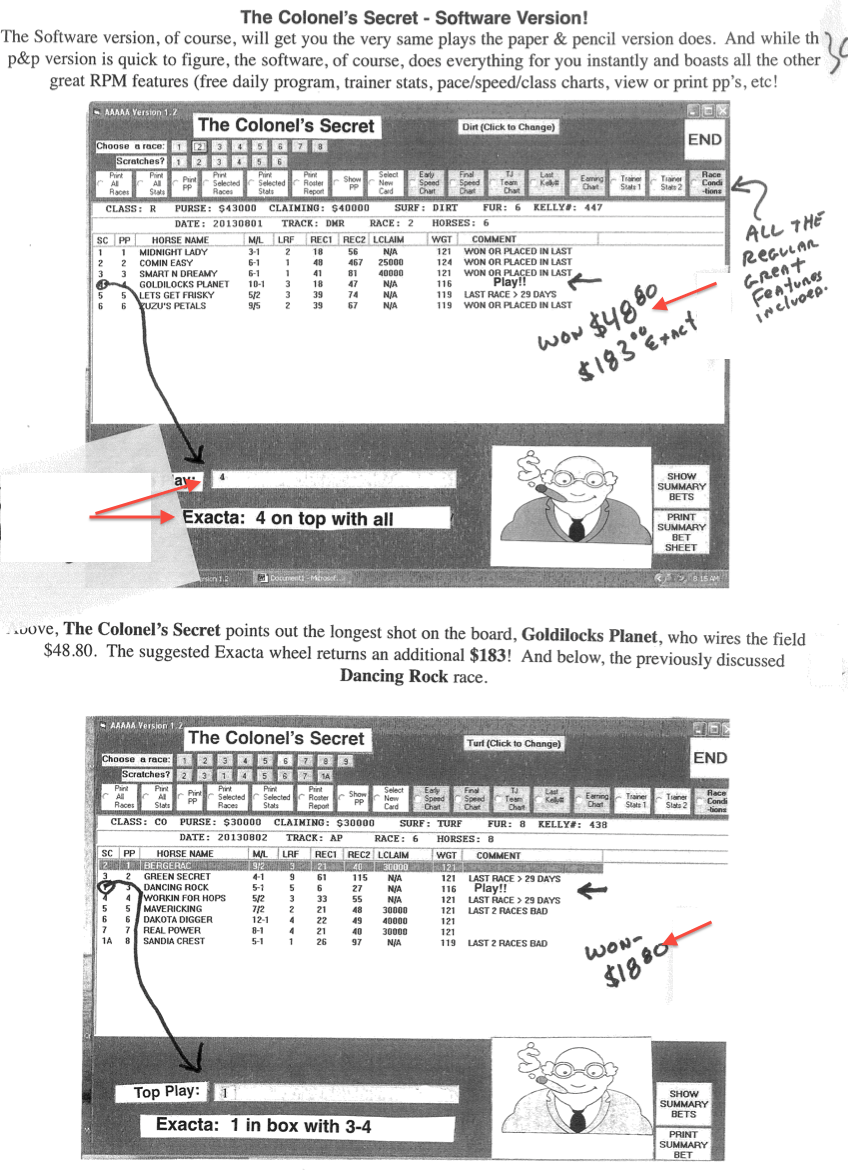 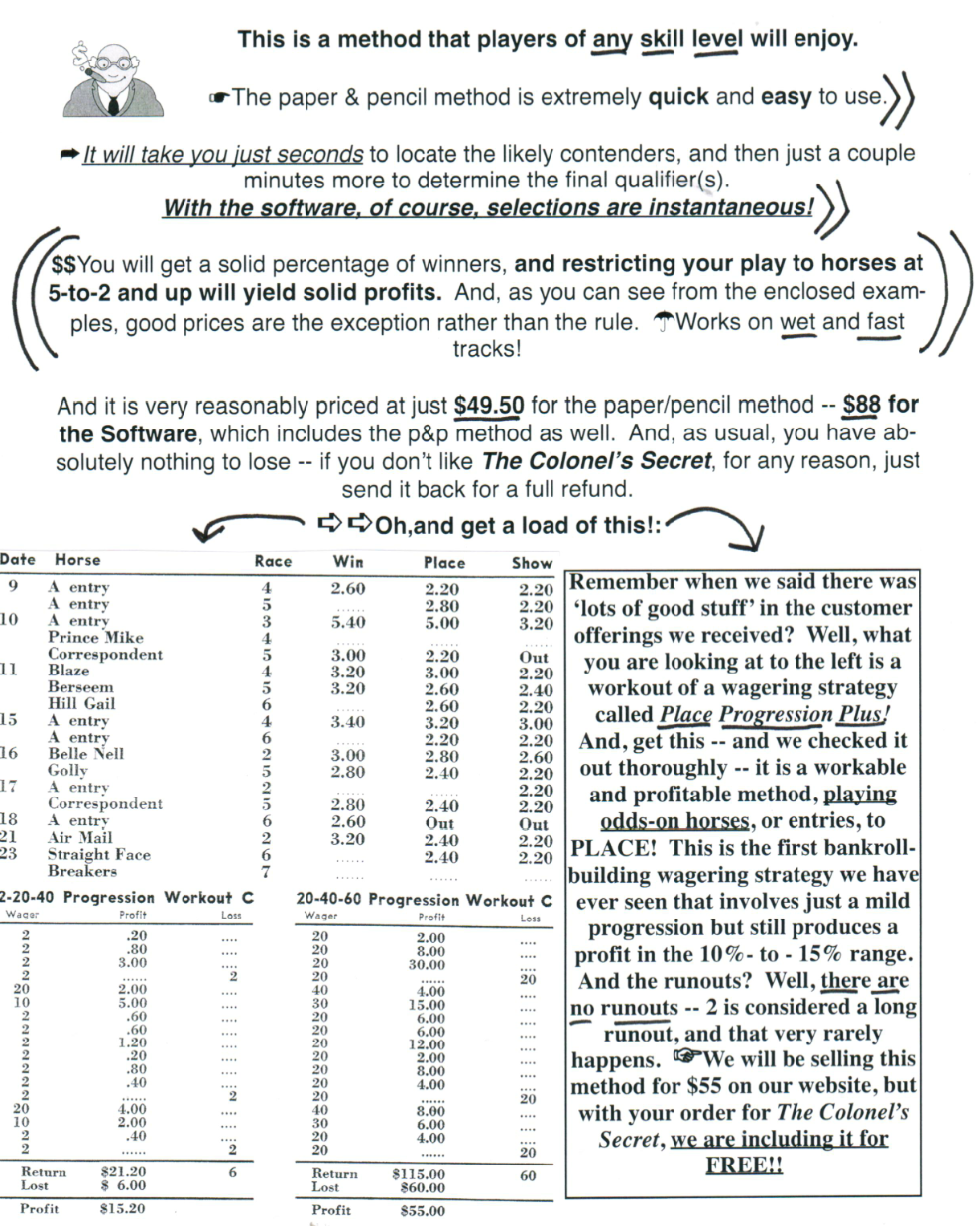 He who hesitates, is lost, the saying goes, and the sooner you get started with The Colonel’s Secret! and Place Progression Plus!, you’ll be walking up to the cashier’s window on a much more frequent basis — and that’s a guarantee.

Try both of these methods for just a couple of weeks, and you’ll be convinced, as we were.

You will get prices galore with The Colonel’s Secret, and will cash an inordinately large number of tickets with Place Progression Plus!