With The Four Aces+2 Software Life is so much easier.  The program does all the work for you and also features the Mack Gant $500 Longshot Method.

No Runouts, No Bad Days, No Worries!

Straight betting profits in all three slots, including a +42% ROI on Place and 33%+ on Show.  You won’t get a lot of big win prices, but who cares! — With The Four Aces+2 you are cashing multiple tickets per day.

In otherwords, runouts are virtually non-existent!

You will DEFINITELY make money on the win end, and if you are a place or show Parlay player, my friend, the world is your oyster!”  Tom Console 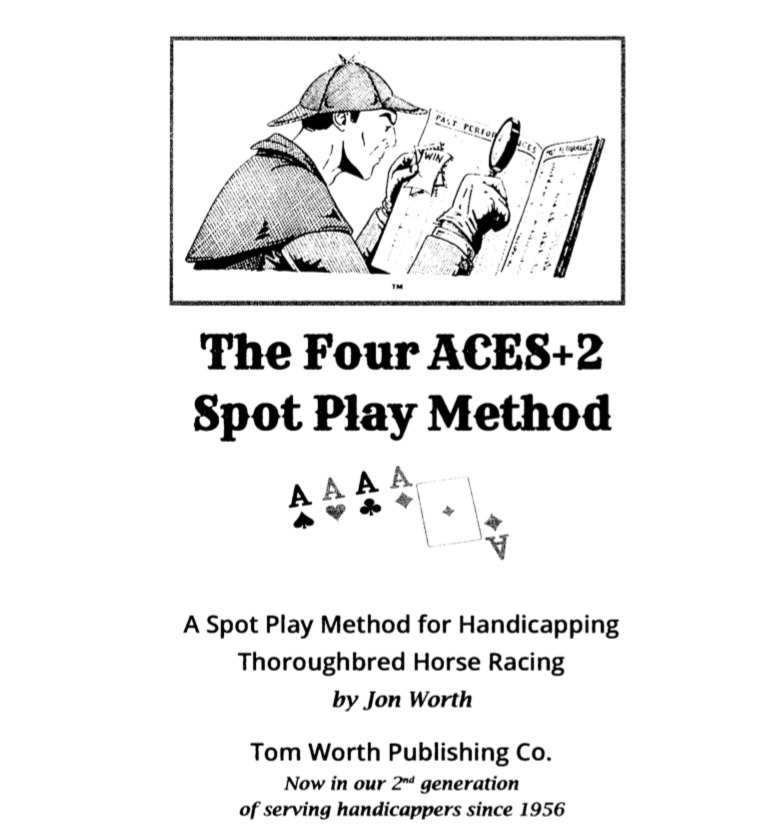 “Jon & his father Tom have always had the reputation of being the ‘Kings’ of Consistency.  Their methods are conservative, simple and user friendly yet produce at times spectacularly steady and profitable results.  And with his new The Four Aces+2 Method, Jon has truly outdone himself.

You want to cash many, many, many more tickets than you tear up?  You want to experience zero runouts and catch 10 or 12 or 14 Place or Show horses in a row?  As a manager of mutuels in New Jersey I know of three or four players who use this method exclusively — they are at the windows cashing so often that that the cashier and I joked about giving them chairs right outside the windows so they don’t have to make the long walk from the rail to the mutuel line!  Trust me, Jon has hit a vein of gold here — no doubt about it.”  Pat Bartolotta, Verona, NJ

Jon tells us: “At Worth Publications we use proven handicapping technology to design winning systems & software. Our ultimate goal is to produce methods of play that the serious fan or casual horseplayer can rely upon for a source of supplemental income.

I normally devote between 70 and 90 hours in creating a successful system — my definition of ‘Successful’ a system that is not only very, very consistent but also one that makes money betting to win, place and show.

Systems like my The Big Easy, Even Finish & ProfitLine Gold all accomplished those goals but my new Four Aces+2, I’ve got to admit, OUTSHINES THEM ALL.”

Take a look at Jon’s Workout below.  Also, in the red text to the right you can read what our Big Database tests showed.

>>>You will be blown away by the consistency of The Four Aces+2 — Often, very often, you will experience long series of cash-ins on the place & show. 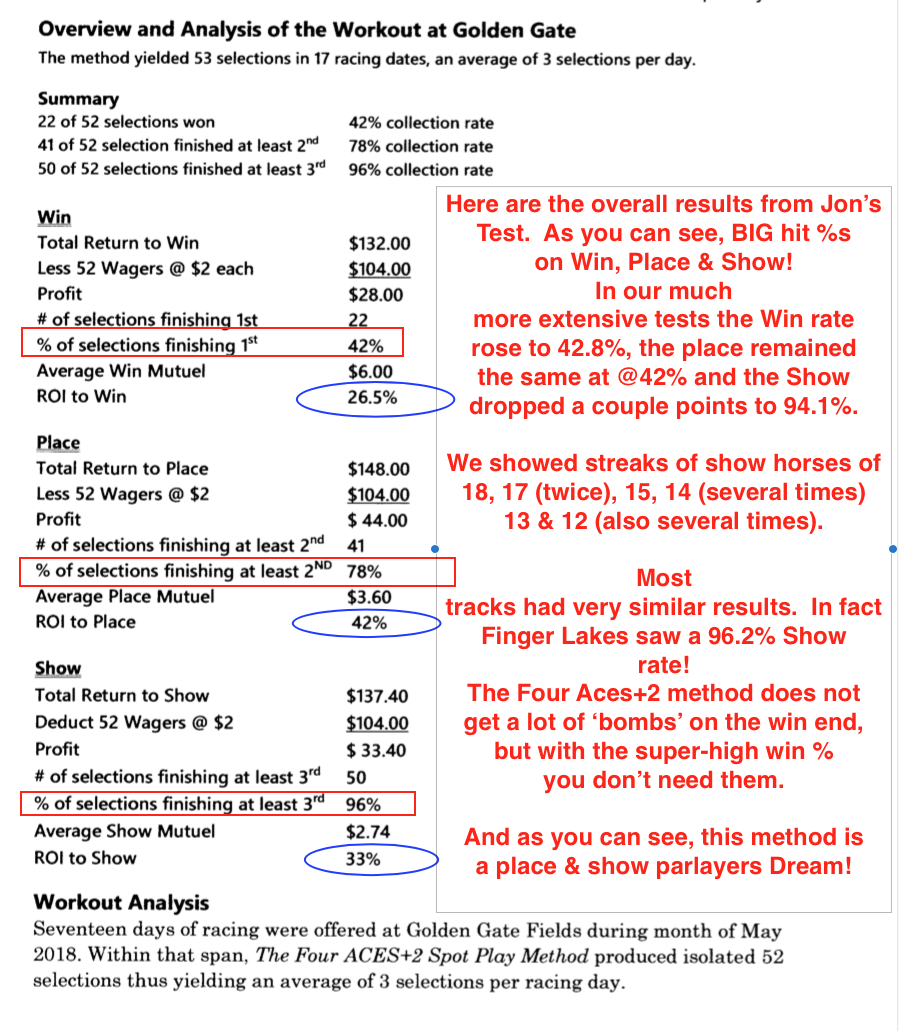 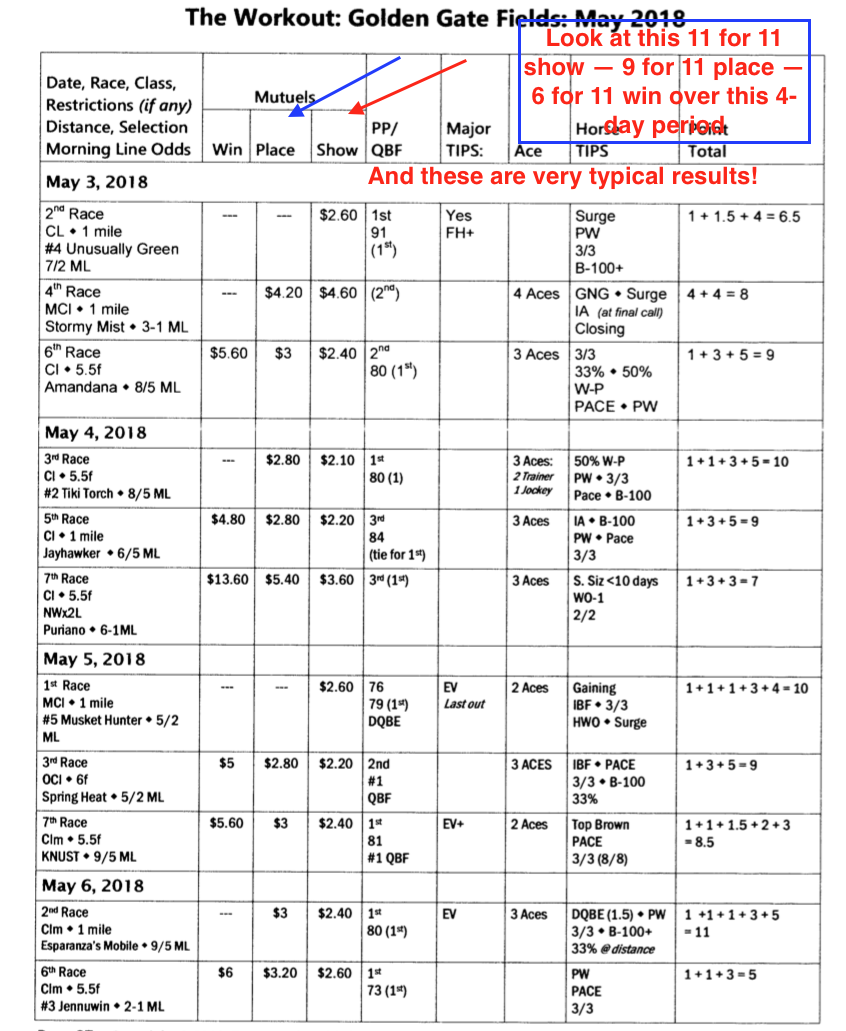 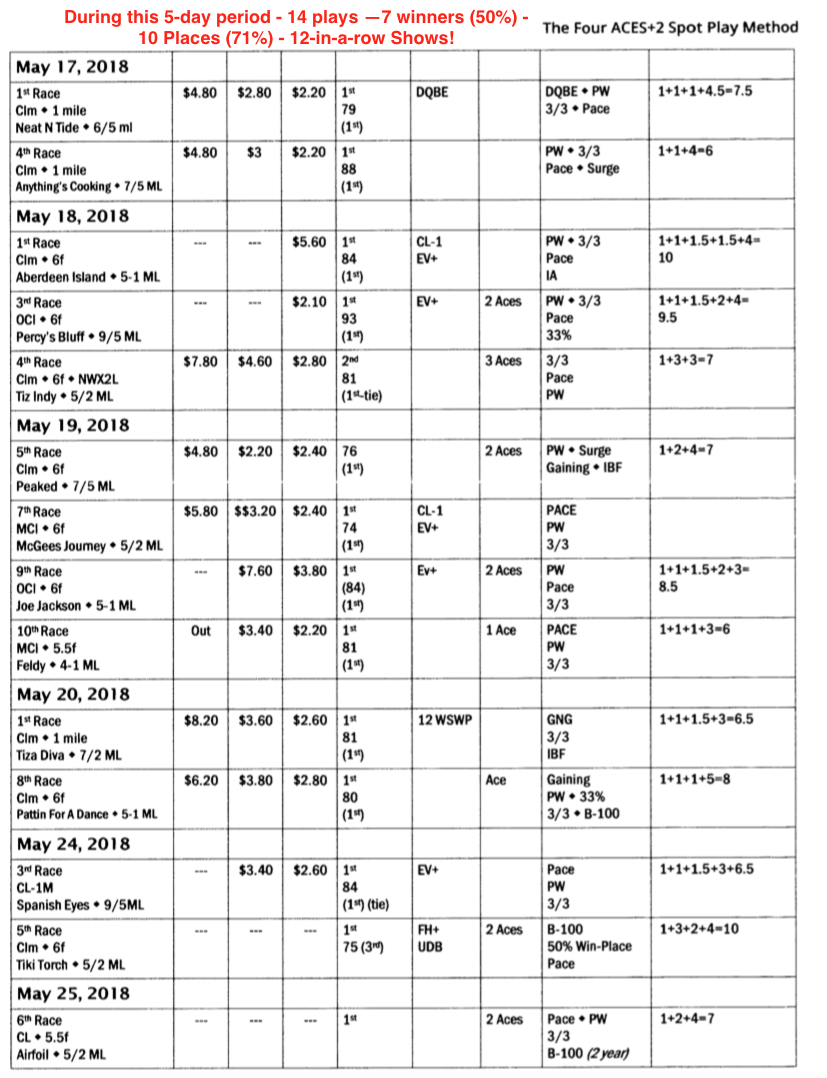 “I have been following the Worth Company since the 1970s and have totally enjoyed their handicapping products.  Jon learned from his father well and then some.  If you are a conservative bettor like myself, who hates runouts and loves cashing tickets, Jon is your boy!  Just got finished testing his new Four Aces+2 and, believe it or not, this method is even more consistent than The Big Easy!, and that’s saying something.  Went to the racebook on Sunday and placed 14 place/show bets.  10 bets ran 2nd and 12 hit the show spot!  If you are an Exacta player (I’m not), you realize that your Four Aces selections will run 1st or 2nd 75% of the time — just sayin’.  Another great job, Jon!”  Henry Copetta, Manasquan, NJ

“Yes, I’m certain I’ve died and gone to horseplayer heaven!  I have been running modified place and show parlays for a little over a week now using the Four Aces selections.  My first parlay caught 8 of 10 shows — $25 turned into $177!  Four Aces is truly a money-multiplier whether you make straight bets or parlays.  Love this system!”  Bob Gross, Muncie, Indiana

What are ‘Aces’♠♣♥♦ and why are they important?

In the vast POPS & TIPS lexicon, an ‘Ace’ represents a significant statistic or a significant ‘move’ by a trainer and/or jockey.  Aces are awarded to trainers and/or riders based on their competence in areas that apply to today’s race.  For example, a trainer may show a high in-the-money % with horses away 45 days or more, or going from a route to sprint, or dozens and dozens of other areas of strength that apply to today’s race.  With a jockey, the stat could be his strength at today’s distance, or overall win % on today’s surface, etc.  Jon has found that when a horse is awarded several Aces:

“The more Aces showing for a contender the better because they usually indicate that the horse’s human connections have demonstrated and earned an incredibly high degree of success pertinent to the conditions for today’s race, which usually results in a big effort.  In otherwords, this horse has a huge edge over the rest of the field.”

As attractive as this product is, our marketing experts tell us that only about 6-to-7% of the people receiving this information will respond to it.  That’s fine from a business standpoint, but it still bothers me personally.  You see, I know how well this method works by not only my own testing but from positive notes from virtually all of our beta-testers.

I hear in letters, over the phone and thru emails from folks all the time asking me ‘what works?’, ‘just give me something that works!’, etc., etc.  Because of this, I just hate the thought of someone not getting the product due to some error or omission in our explanation.

>>>That’s why I am offering you an additional inducement to at least give The Four Aces+2 a try (remember, it is fully guaranteed).

Some of you may remember Mack Gant.  He was a true racetrack ‘character’: checkered jacket, an old hat he must have gotten from some 1940’s movie set, and a huge white beard & mustache.  He frequented the Bowie racetrack, but when it closed spent his days at Pimlico and Laurel.

Anyway, he was known for his longshot play — He only played price horses — made a living doing it — was famous locally for picking Bee Bee Bee to win the 1972 Preakness Stakes — he had $600 to win on the $41 horse! — and in the late 90s/early 2000s marketed his system under the name of

Mack left us in 2008, but his legacy, and his Longshot Method, live on.

Mack knew my Dad well, and digging through his belongings several years after he passed I found a copy of Mack’s method — Giant Red Letters on the front cover  — two pages of rules and explanations — and then a back page covered with those same giant letters MACK GANT’S $500 LONGSHOT SYSTEM!

Well, I’m not a longshot player — give me a high % place/show method and I’m in heaven — and most of the methods my Father and I designed fit that bill.  So I had Len Cz run it through his database.

So it turns out old Mack wasn’t all bluster and mustache  — he spent his life at the track for a reason — he was making an actual good living out there!

A Bonus, a Gift, if you will, to encourage you to try Four Aces, which I know you are going to love.

And as you know, you can contact me at any time with any questions you may have.  Thanks for listening, Jon

With The Four Aces+2 Software Life is so much easier.  The program does all the work for you and also features the Mack Gant $500 Longshot Method.  Some screenshots below:

Four Aces is absolutely fabulous when the top pick is the morning line favorite – with a win rate in the 45%+ range! 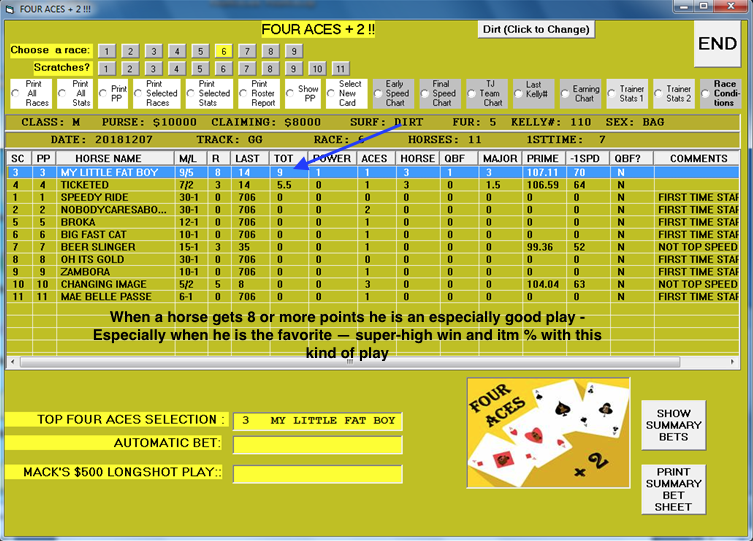 Another high % play — when the Top Selection and the Automatic Bet are the same!  Here Knots On Fire won easily at an overlaid $8.60 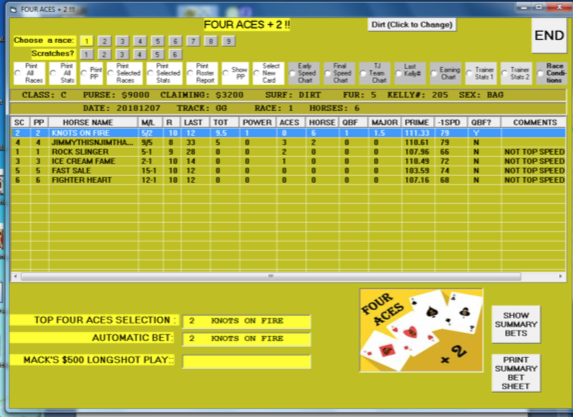