A Unique Racetrack Formula Emphasizing Recent Performance – Perhaps the Best Methodology We Have Tested Producing Great Overlays from Horses Whose ‘Form’ is Truly ‘Hidden’ in the PPs! 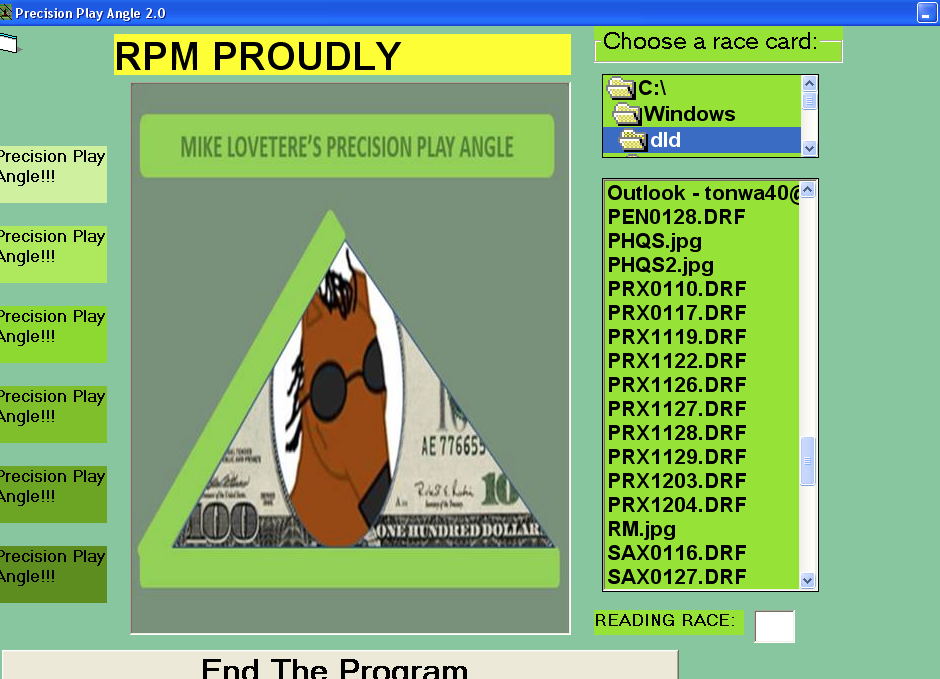 A Unique Racetrack Formula Emphasizing Recent Performance – Perhaps the Best Methodology We Have Tested Producing Great Overlays from Horses Whose ‘Form’ is Truly ‘Hidden’ in the PPs!

Michael Lovetere never really considered playing professionally.  He enjoyed the game and did pretty darned well at the windows, but it was mostly a ‘hobby’ for him.

But then a funny thing happened on the way to the racetrack.

Mike was waiting at a crowded off ramp to turn onto the road that led to Arlington Park when, BAM!, the SUV behind plowed into him.

While it was a good ‘bump’, not much damage was done and no one was hurt, so Mike pulled over and got out to exchange info with the offending driver.  ‘I’ve seen this guy before’, Mike thought to himself, and when the SUV driver apologized — said his daughter had spilled her milkshake on the console — and introduced himself as Jason, Mike blurted out: ‘Hey, I’ve met you before — we were in the DRF qualifying tournament at Hawthorne last year.’

Jason said, ‘Oh, right, Mike?, right?  Hey, again, I’m really sorry about this.  My insurance is up to date and will take care of it.’

Mike nodded, ‘I’ve been there before — ran into the back of a Subaru about 10 years ago so maybe this is my karma!’  They both laughed.  ‘You heading to the track?’ Jason asked.  ‘Of course, everybody on this off ramp is going to the same place!  Hey, I’m on level 3, section C — tough card today, come up and see me.’  ‘Deal’, Jason said, ‘and of course I’ll be buying the drinks!’

***Little did Mike know that this ‘accident’ would lead to something he could never have anticipated — a piece to the ‘puzzle’ he had long been searching for.  The puzzle = finding success at the racetrack.  The piece = a way to identify current ‘form’ that few in the world of handicapping knew anything about.***

Mike tells us:  ‘I knew Jason was a good handicapper — we both had done well in the Hawthorne tournament, but neither of us were able to depend upon wagering as an income, or supplementary income at least.  But we put our heads together and came up with something great!

→⇒♦I remember Jason saying: ‘Look, we both know that the trainer is the key to this game — and we both know that most trainers work their horses into good ‘form’ through racing and workouts.  Well, I think I’ve found something — something I’ve never read or heard about from any ‘expert’, or horseplayer.  I’ve been testing it for a long time — it’s hidden in the past performance lines — and some of the prices are huge!’

Mike continues:  ‘The weird thing is that my biggest handicapping weakness was identifying horses who were in good form.  I had a difficult time telling if the horse was in good form, or if the trainer wanted the public and other trainers to just think it was in good form.  But what Jason showed me put everything into place.  My regular methodology was solid, but now with the ‘hidden’ form angle added in, the wins, and especially the big mutuels, really started adding up!’

Let’s say you are a dog breeder who shows hounds in big-time dog shows.  In order to win a ribbon in one of these competitions, your dog will have to be in top ‘form’, i.e., well-groomed, showing an eager and confident stride, able to obey commands without hesitation, etc.  You likely will have spent scores of hours getting him ready for this competition — and you hope all of the practice has him show-ready.

The life and work of a trainer of thoroughbred racehorses is much the same.  They spend most of their days teaching their charges to break from the gate properly, to respond to the rider’s subtle commands and hopefully, due to diligent conditioning, have him/her ready to sustain their energy through the lane.

→⇒Now, there is a big difference between dog trainers and racehorse trainers.  The racing game, in general, provides much larger purse rewards much more frequently, AND, horse races can be wagered upon, which gives the trainer/stable additional opportunities to cash a paycheck.

And because big paydays are a must to enable stables to take care of the very steep expenses they incur, trainers often work their horses into winning form in ways that may not be completely evident to the wagering public.

So, let’s say that you discovered a way to ‘read’ these trainer moves — that you are actually putting yourself into the trainer’s mind — that you can spot when a trainer is using races/workouts to ‘hide’ a big upcoming performance.

√√Think you would be cashing on horses that would largely be ignored by the public?

→⇒Of course you would, and this, in a nutshell, is what the Precision Profit Play Angle is all about.

has been researched and tested on over half a million races.  Because of the high average win mutuel (@$10.14) longterm results have been sensational, with a positive ROI close to +43%!

PPPA uncovers HIDDEN FORM — form that the trainer is often trying to disguise — often in the quest of a nice pari-mutuel payoff.

Check out the examples below –  then check out the program for yourself  — The Precision Profit Play Angle is a must have for any player hoping to gain an edge on the game — an edge only a small minority of all racetrackers possess. 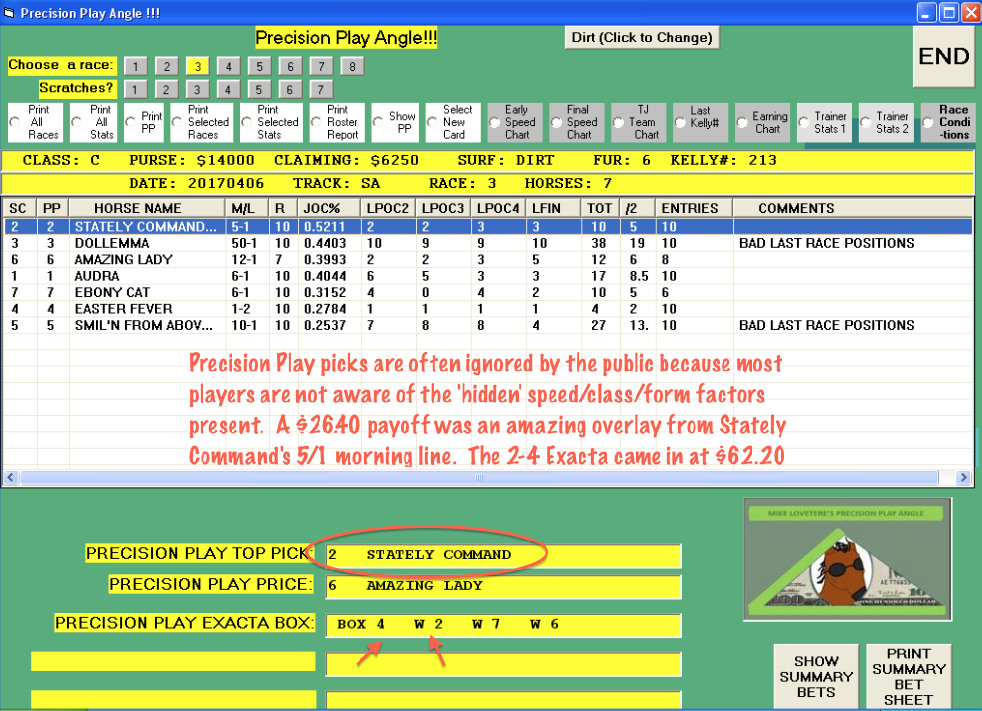 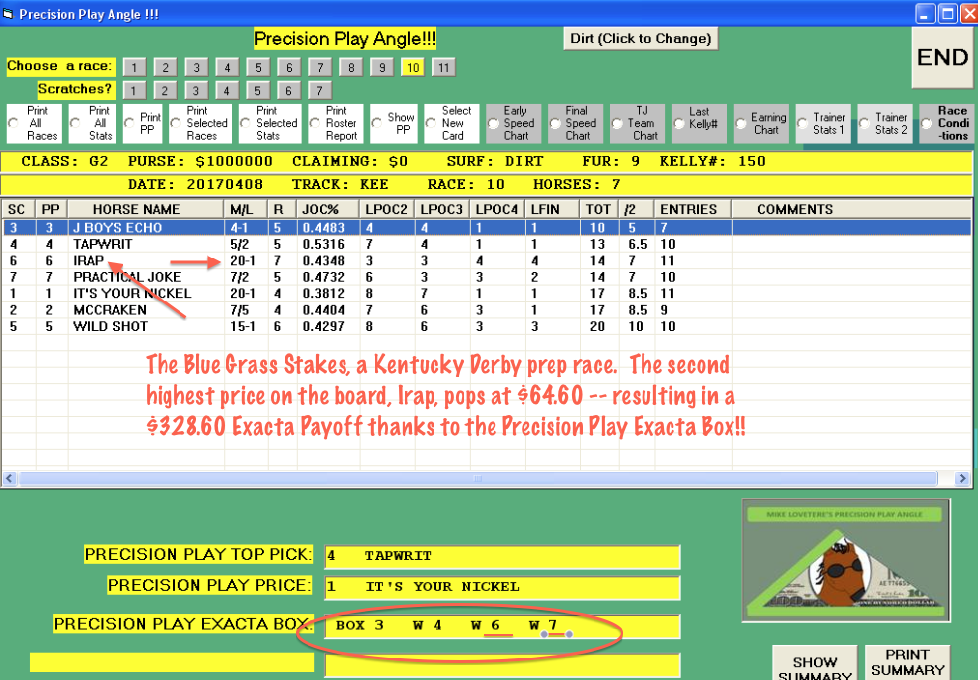 Another fit and ready PPA horse strikes at double digits 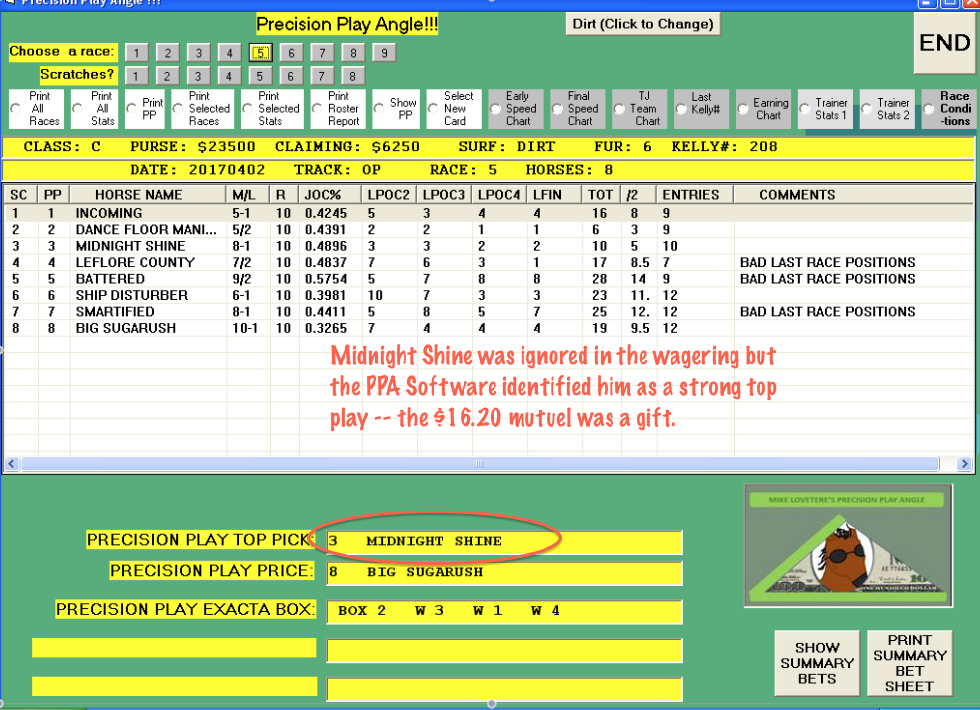 The Precision Price Play feature nabs the longest shot on the board! 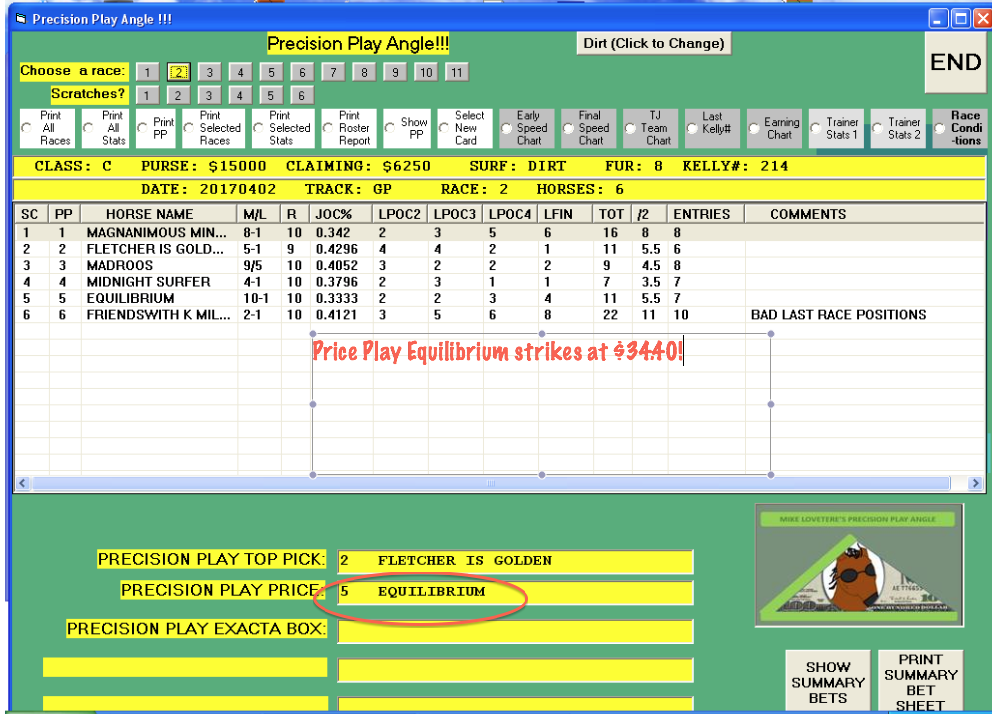 A fairly obvious PPA Top Pick scores at a nice price and the Exacta ($84.60) and Trifecta ($462.40) make this a hugely profitable race 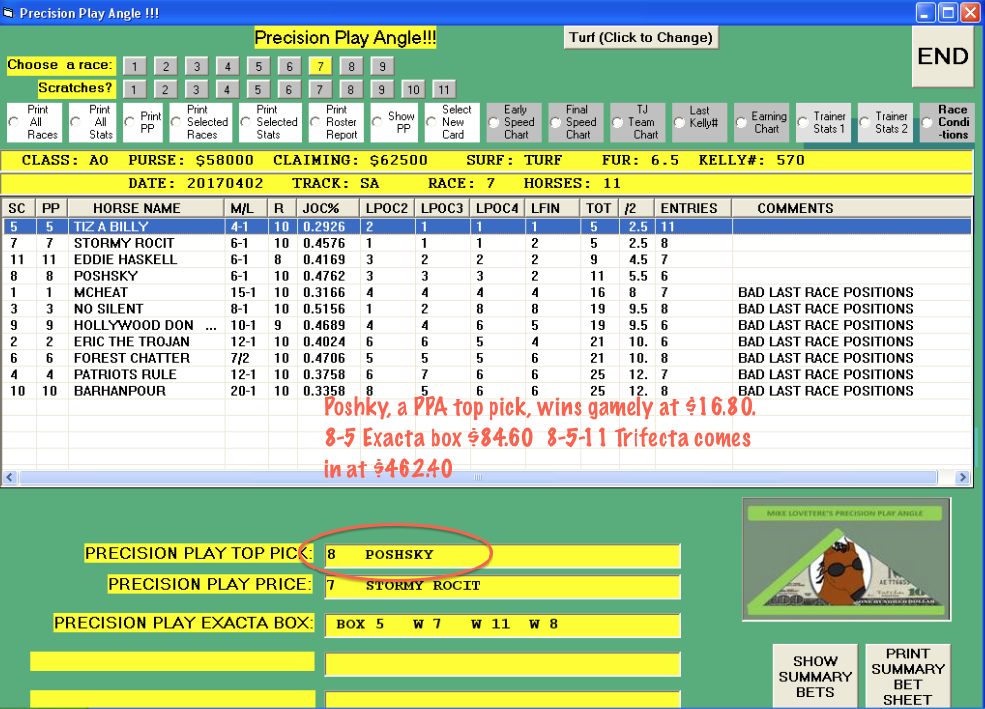 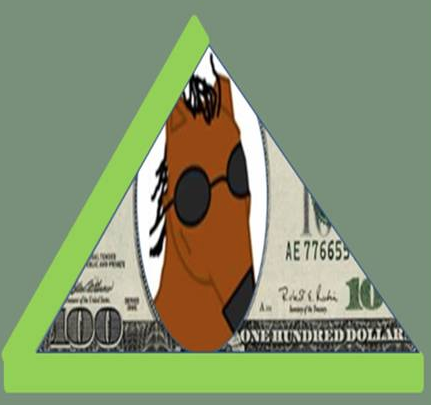 Entries = # of entries in most recent race — used to determine if horse is likely to be competitive today.