Dear Fellow Horseplayer:
The ‘Homerun’.  That’s what I hear them talking about at the racebook all the time.  No, they’re not referring to baseball, but rather to the out-of-the-ballpark ‘hit’ they’re hoping to make on the horses to carry them thru the rest of their days.  So they line up at the windows, race after race, playing wild longshots and impossible Trifectas and Superfectas, most with little thought before the fact.  In fact, the main motivation for playing these type of bets is because they’re ‘there’.

Now I’m not trying to discourage playing these potentially lucrative exotic bets.  I wade in often when I feel I have a reasonable chance of cashing.  What I am trying to discourage is the ‘homerun’ mentality, where race after race the player is shooting for the moon.  I have been playing this game for profit for a long time now, and the ‘homeruns’ I have hit, the $135,000 and $68,990 Pick Six; the $42,000 Superfecta; the $22,600 and $19,008 Trifecta, etc., all came in due course.  In otherwords, in none of these situations was I pinning my hopes of paying the mortgage for the next five years.  I simply went about my normal pattern of play, and the occasional big hits just happened.

What I have learned from 30+ years of playing this game is that the race goes to the steady rather than the flash in the pan.  Most of the horseplayers I come in contact with at the racebooks and track seem to be in a ‘hurry’ to make the big score. Very little thought and almost no preparation prior to raceday.  And the emotional swings, from ecstacy to downright depression, take their toll by making these fellows and gals very cynical about the game.  They are always looking for someone to blame to explain their losses – the jock, trainer, racetrack management, etc. – never stopping to think that maybe, just maybe, the fact that they lack a plan of attack and are unable to control their emotions are the reasons for their misfortunes.

What I’m basically trying to tell you is that to hope to turn a profit at this very difficult game, you need a plan.  You need to know how to handle a losing streak.  You need to know how to smooth out those steep hills and valleys that rule your emotions.  You need to be consistent in your wagering actions, i.e., playing only when you feel the odds are in your favor.  Basically, you need to approach this game as you would any other business you run for profit.  Not one in 20 horsplayers have ever given this more than a passing thought, which is why only a small percentage of all players win consistently!

But I’m here to tell you that you don’t have to be among the losers, and I can show you a ‘plan’ that if followed to the letter, will allow you to profit consistenly playing several tracks at one time!  Read On…

Documented* Results From Tracks Across The Nation!

Races on main track for winners only races considered.

Based on $20 win bet. Similar results were realized at all U.S. tracks.

What Tom Console’s Personal Racebook Method Will Do For You!

Tom’s Personal Racebook Method is designed for one purpose and for one purpose only: To give the player a quick and accurate way to select winners at multiple racetracks.  For most players, just trying to shake loose a winner at one track is tough enough, but most handicappers really go in the tank when trying to play several tracks at the same time.
Tom plays the races for a living. Period!  He plays at both the racetrack and over the Internet when playing multiple tracks from the comfort of his home office.  When he’s playing outside his home circuit, most of his plays are derived from his Personal Racebook Method.  He averages @3 solid plays per racetrack per day.  His ‘Exotic Wagering Strategies’ (included in text) also returns hefty dividends.  You can expect the same results whether playing one track or several!

Tom Console has played the horses professionally for over 30 years now.  He has won two major handicapping tournaments, has hit four Pick 6’s paying $80,000 or more and has pretty much lived out every horseplayer’s dream.  His Snap Capper Pro and Race Profit Generator Software have been widely heralded as two of the best handicapping programs ever created.  His articles have appeared in American Turf Monthly, Racing Action, Horseplayer Magazine and Today’s Racing Digest. His Tru-Tenders, FG Method K-Speed & ‘Q’ are some of the best-selling handicapping systems of all time. He lives in Arizona with his wife, two children and puppy dog. 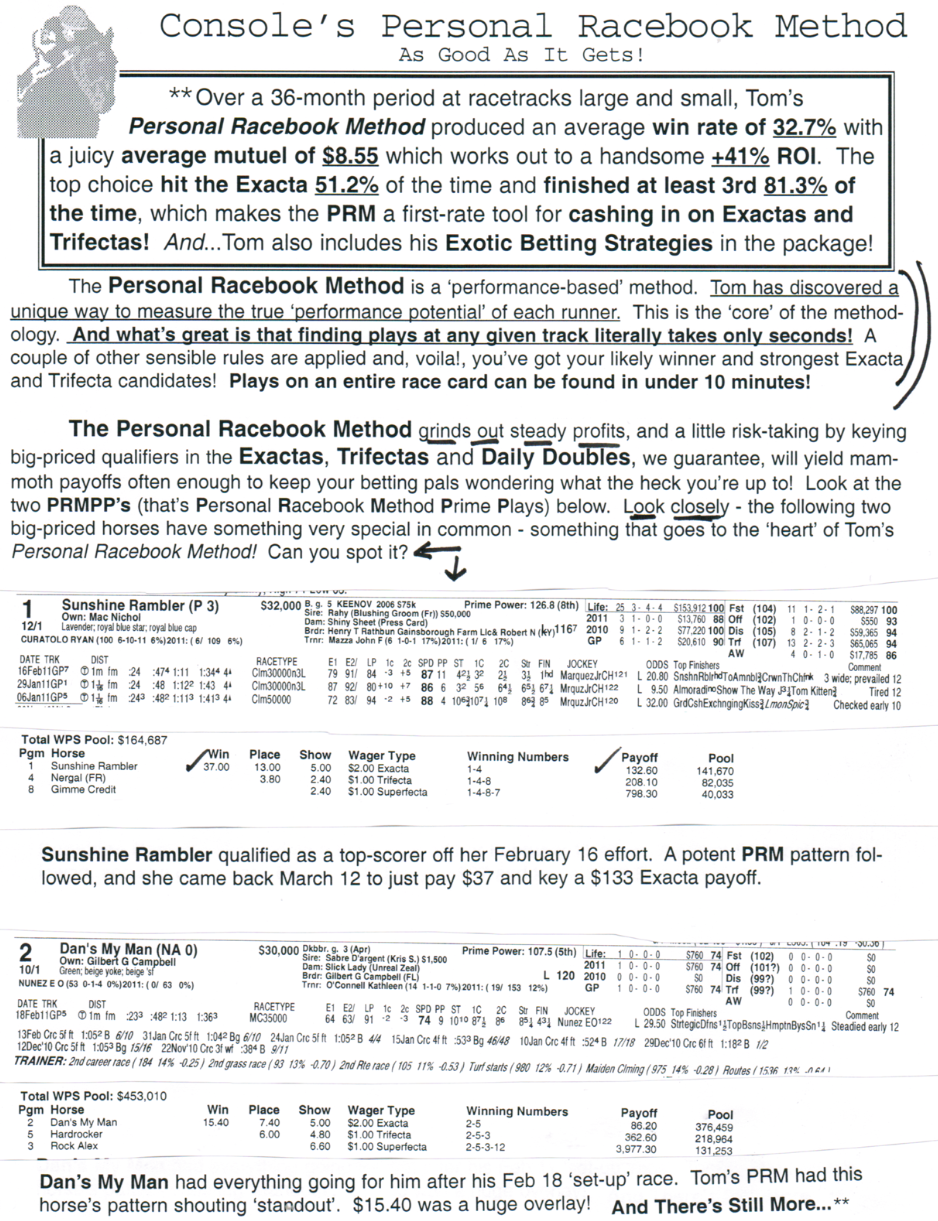 Industry-Wide Respect for One of the Nation’s Top Handicappers!

‘Tom Console is doing what you and I and thousands of horsesplayers have dreamed about for years: playing the horses for a living.  Take to heart what he has to say in his Personal Racebook Method and you’ll find that dream well within your reach as well.’  David Powers
‘You remember our review of Tom’s FG Method & Tru-Tenders.  We were even more enthused than Phillips Racing Newsletter, and they awarded both of those systems high ratings!  Now Tom is back, taking a brief respite from his computer handicapping to show us what he does best – knocking ‘em dead at the racebooks and off-track betting parlors!  If you only buy one method of play this year, or for the rest of your life for that matter, this should be the one!  We can’t say enough good things about the Personal Racebook Method!’  Tim Sullivan, Systems & Methods
‘A unique methodology that works wonderfully whether you’re playing one track or several!’
Dick Johnson, author, True HorsePower

Now, seriously folks, where else are you going to get a deal like this?  When you purchase Tom Console’s Personal Racebook Method within 14 days of this offer, we’re also going to send you a copy of Steve Derrick’s best-selling Claiming Race Money Move, at absolutely no additional charge!  Steve is one of the better known professtionals in the game – plying his trade mostly on the East Coast.

His specialty is claiming races, and the angle you are going to receive is a true ‘insider’ kind of play. In his Claiming Race Money Move!, you will have at your profitable disposal Steve’s extremely well-researched trainer data and simple rules that make certain horses in claiming races an ‘automatic’ bet.  You’ll simply be looking at the trainer stats and two other ‘secret’ ‘tells’ in the pp’s.. Some of the prices are huge, like the $167 winner we hit at Lousiana Downs in September.
This is a $49 retail value, yours FREE!

Oh, and we’ve got even more from you!  With Mark Cramer’s permission, we will also send you his 2nd-Time Starters – The Mystery Unravels Method FREE!!

Mark clearly shows you how to grab your share of winning horses making just the second start of their careers!  Dynamite stuff and highly profitable!! a $55 value

So look here.  Not only are you being provided with a true pro player’s personal, private method.  you are also getting the claiming trainer expertise of another well-known pro & Mark Cramer’s Key to Maiden 2nd-Timer profits!  think you can go wrong by taking advantage of this offer??!!  Think again!!

This is without a doubt one of the best ‘value’ package we have ever offered.   Tom Console will show you how to turn your game around.  Overnight!  Don’t pass this one up!

Q. Tom, why did you decide to release a paper and pencil method since your expertise is computers?
A. It turns out that only a fairly small percentage, I’d say about 45%, of horseplayers own computers or are competent enough with them to properly use computer programs.  While I am primarily a computer handicapper, from a business standpoint, that leaves a lot of my longtime customers in the dark, so I’m offering my Personal Racebook Method to all who prefer an accurate paper-and-pencil method of play.  Of course, I think even computer users would be interested in this method — it is so darned easy and effective — I started using it in 1986 and when I’m traveling and don’t have access to the Internet or just don’t feel like hassling with it, I use this method exclusively.

Q. How many races has your Racebook Method been tested on?
A. Dave Powers has the big database and had his stat team run the method through close to 300,000 races.  The results were remarkably similar to the results I have been getting for years.  The win rate was close to 33% and the ROI close to 42%.  And that’s great, but I will also show you how to use the method to cash in on some of the biggest Exactas, Trifectas, Pick 3’s, etc., you ever have.  I know that sounds like a boast, but the exotic betting formulas I have developed over the years yield enormous payoffs and profits.  I promise you — you will likely hit one of these biggies in your first week of play with the PRM — that’s how confident I am with my strategies.

Q. You say the method is quick and easy.  How quick and easy?
A. Well, #1, you are only going to concentrate on races between 5-1/2 furlongs and 7 furlongs. #2, you are looking for just one factor in the horse’s most recent running line to determine a potential play.  It is a factor that I have found to be one of the best ‘predictors’ of a future big performance in the game.  You then need to apply only a couple of other rules and you will have a horse that will run 1st or 2nd close to half the time.  It shouldn’t take you more than 10 or 15 minutes to find plays on an entire card.

Q. How many plays can I expect per day?
A. I average two to four solid win/place plays per day per track, and one or two Exacta, Trifecta, Pick 3, etc., plays per track per day.  And again, I will show you exactly how to make the profitable exotic wagers.

Q. What is your guarantee?
A. Very simple:  If you are not happy with the method, for any reason, you may return it within 30 days for a full refund.

A Great Package At A Great Price!