Profiting From The Races as a Home-Based Business?

Hi Folks:
Tom Console here. I’m back rather quickly, unusual for me, WITH NEWS ON A SENSATIONAL NEW HANDICAPPING PRODUCT THAT RECENTLY CROSSED MY DESK. As I’ve told you before, I get dozens of products in the mail monthly with the authors normally asking me to either test out their system or endorse them. Some of the stuff is pretty good—some not so and some of it is outright junk. But every once in awhile something sneaks in that is a real winner, and those are the only products I will put my name to as an endorsement and recommendation for purchase.

About a month ago I received a package from handicapper Jeff Sillifant. When I opened it a nicely printed booklet fell out with the following note: The TLD shows Profits for Win, Place and SHOW!! Jeff’s letter sounded sincere, and I could tell he was excited, which often indicates a worthwhile product. (Jeff, by the way, has turned out some other real goodies, like the Max-21 Strategy and more recently, Play day Payday). As I paged through the booklet, the whole concept he laid out began to make more and more sense to me. The method itself is dirt-simple, based on odds from the last two races—anyone with a 5th-grade education could understand it. Most of the booklet was taken up by pages of actual results from the tracks that Jeff had been playing. The other thing that struck me was how carefully Jeff explains the rather simple strategy — you can tell that he really wants the reader to succeed!

So I put the method to a little test. I brought up the last 3 months of win-key bets generated by my URTI software program. I then took a look at the TLD results from the same races. While the URTI had a higher win % (34.6%) and somewhere close to 28% of the winners were the same as the TLD, the URTI ROI (+29%) paled in comparison to Jeff’s method (+73%).

Dear Tom:
Hope all is going well. I trust your opinion more than anyone else’s in the business, because I know you’re a ‘no BS’ kind of guy. I have recently worked out a selection method that has produced some incredible results — I’ve already shown them to Dave Powers and Len Czyzniejewski, and they were both impressed. It is based on odds patterns that anyone can pick out from the pp’s. To that end I think you’re going to like what I’ve sent you. I have been testing this method since January. As you can see – there is almost no handicapping involved. You can see the Summer meets that I tested and came up with a profit on small bets of over $7,100! You can also see that the profits are much higher if you go with races with just a ‘lone’ qualifier — the ROI on Del Mar, Saratoga, Arlington and Calder was +122%, the biggest number I’ve ever realized with any of my systems. I don’t see any flaws with this method and honestly believe it can turn a confirmed loser into a steady winner…and literally overnight. And the fact that the method does not experience long losing streaks and hits some real nice Exactas makes me think The Lifeline Discovery, which I named it, will suit any player’s style. I know this may sound a bit far-fetched, but seriously, I am convinced, and I think you will be too, that any player, regardless of his/her degree of sophistication, can literally start up a ‘home business’ with a modest bankroll and make a good supplemental income by using my method. I got the ‘home business’ line from an old customer who is testing the method, by the way, who wrote ecstatically ‘I’ve always wanted to work out of my home, and with the TLD strategy, I’ve now got my own home business!’ Let me know what you think. Because you are one of the most respected handicappers in the game, I would really appreciate your input. ~ Yours Truly, Jeff

So what that means is that for every $1 you invested on the TLD selections, you got $1.73 back.

Oooo, I’d like to find a slot machine in ‘Vegas with that kind of return!

I also took a look at all of the plays over the summer that Jeff listed in the booklet he sent me. They all checked out as valid plays, and the +66% ROI is simply amazing considering he was playing mostly Saratoga and Del Mar, two of the toughest meetings around to get a good handle on. Then I tried something else. I simply took a random racemeet, the 2009 Santa Anita meet, and I ended up with a $4,100 profit on $20 win wagers and another $3,910 profit on Exactas using TLD. So, yes, Jeff has indeed landed on something BIG. I simply love what he has done here. As Jeff writes: Like all horseplayers, I have suffered and lost big bucks at the track. I have had my share of super days, but overall what I always lacked was consistency. What the horseplayer needs is the ability to sustain his bankroll through those bad luck periods that plague every gambler, every horseplayer. This method will give you what you need to survive and prosper and to eventually come out a big winner.

Jeff originally designed the method for himself. That’s how most of these things start: a player works for years to develop a winning method, then plays it for awhile, then figures, heck, if this thing is working for me, it will work for anybody — maybe I can pull in some extra $ by marketing it. That’s where I come in. Having marketed my own products for years, I know what appeals to serious fans and what does not. I also go by this golden rule: Never market anything you wouldn’t purchase yourself. So after I look at and test a product I ask myself if I would buy it. When the answer is yes, the product has my 100% endorsement. I get so many letters and e-mails from folks who ask me how they can make a profit at the races. When I find a way, and there are many, I let them, and you, know.

The Life line Discovery ranks up there among the best thoroughbred selection tools I have seen, and I include some of my work, Dave Powers work, Walt Owens work and Len ‘Cz’s’ doings in that group. And as Walt Owen used to tell me: ‘Knowledge at the racetrack is everything—you need to know more than the other guy, and when you know a lot more, you are literally taking money from him, and it’s one heck you have a wonderful feeling!’ Stick to this plan, and you can make good profits by doing very little handicapping. That’s the genius of the really solidly profitable systems — the authors have ‘discovered’ little ‘quirks’ that let you bypass the drudgery of handicapping. This method works, period!

You can start with a relatively modest bankroll and bet @5% of your bankroll per wager. THE REALLY FASCINATING THING ABOUT THIS STRATEGY, IS THAT IF YOU ARE PLAYING A FEW TRACKS AT A TIME, YOU ARE ALWAYS HITTING SOMETHING, OFTEN A LOT OF ‘SOMETHINGS’, EVERY DAY, AND THAT WAY, THE PROFITS REALLY PILE UP!

My recommendation: If you are truly serious about making money at the races, buy THE LIFELINE DISCOVERY. It’s simple, straightforward and it works. What more could you ask for? Give it a try, and experience how much fun it is to WIN, and WIN consistently!

P.S. and check out Jeff’s profit figures on the next page — they are REAL and they are very impressive!

One interesting difference between TLD and my other methods is that this method does not use race or track ‘class’ at all — it proved meaningless to the overall profitable results, so that’s one factor you simply won’t have to worry about. What TLD does, in a bit of a ‘stealth’ manner, is trust the trainer to place his horse in a position to make a serious run at the money spots. THIS ODDS PATTERN I HAVE DISCOVERED, AND I THINK THIS IS A ‘FIRST’ SINCE I HAVE NEVER SEEN IT USED BEFORE — IS DISCERNIBLE AT A GLANCE AND TIME AFTER TIME AFTER TIME LEADS TO NICE-PRICED WINNERS AND JUICY EXACTA PAYOFFS. When you see it you are going to say ‘why didn’t anybody think of this before!’ Don’t ask me — all I know is that it works, and that’s all I care about! ~ Jeff 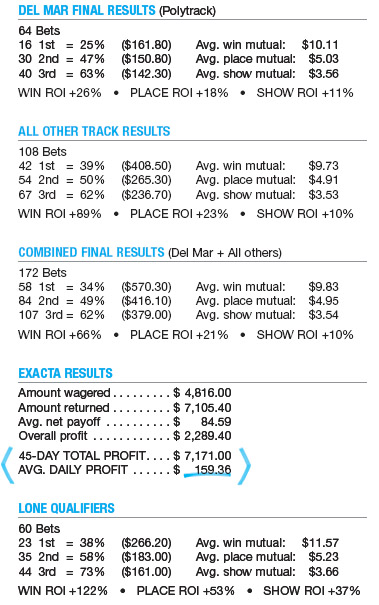 You can see that over the 45 days of this test we made a nice profit of $7,171.00! This was using $20 win and place wagers and $2 Exacta wheels. So, if you bet only half that amount, your profits would be half. Had you bet twice that much, you would have zoomed into the +$14,000 profit zone over this time period. Note that we also included the verydifficult-to-handicap Del Mar Polytrack—that surface frustrated handicappers far and wide so the fact that TLD beat this meeting handily is impressive! And, again, if you just wanted to ‘play it safe’, cashing in on a lot of bets with a modest ROI, stick to the show spot. You may even consider doing ‘modified’ parlays with the show horses with a bankroll management plan like Dr. Anthony’s Parlay Power Match or The 12-Step Money-Management Plan. As you can see, we’ve built diversity into TLD. It may just be our most versatile piece of work yet. So do your own test and you’ll surely find a plan to suit your comfort zone. This is very typical of what you can expect. In fact, when you get the method, you will get the complete workout for the results on this page day-by day, track-by track! There will be a day here and there where nothing hits at a particular track, but on the vast majority of days YOU ARE CASHING. Give TLD a try—you have nothing to lose— if you don’t like the method, for any reason, you can send it back for a full refund at any time. So seriously, check out how easy cashing in consistently can really be!