While he was compiling the Daily Double hit rates, which normally require crisscrossing three horses in consecutive races, he noticed that the horses who had the highest point count (of the three DD contenders) were not only winning at a high rate but often paying super nice prices.

While he was compiling the Daily Double hit rates, which normally require crisscrossing three horses in consecutive races, he noticed that the horses who had the highest point count (of the three DD contenders) were not only winning at a high rate but often paying super nice prices.

So Len did a separate database study on these plays and the results were remarkable:

He found that when betting the Top Scorer in certain categories (Class, Odds, Field Size, etc), long-term profits were realized.

And they were significant positive ROIs, not just pennies on the dollar, and these results remained intact over two 61,000+ database tests.

In otherwords, if you simply stick to these categories with the Top Scorers, your chances of coming out ahead is virtually assured. 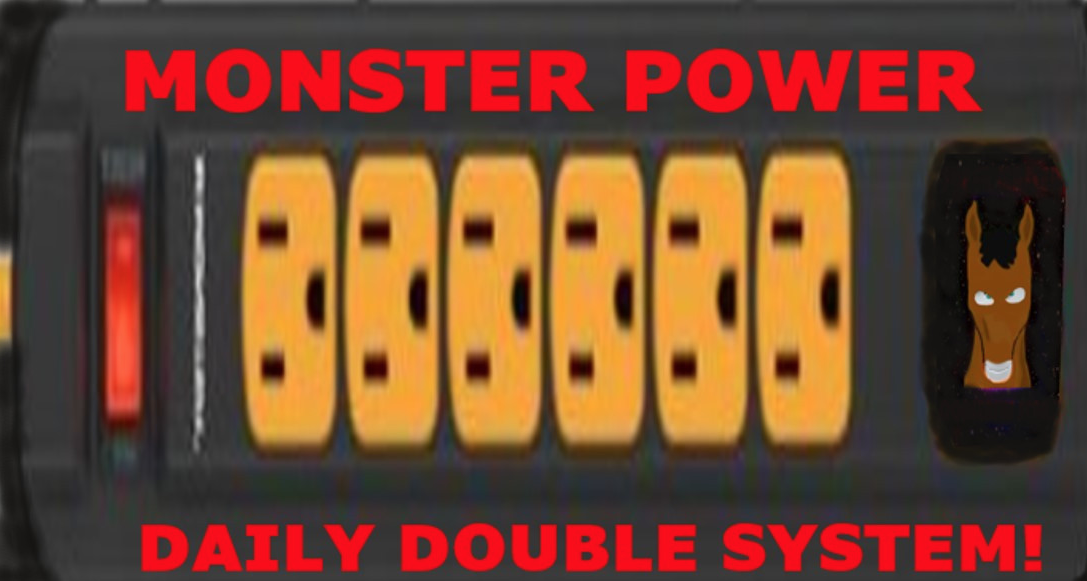 This is one we discovered in Bert’s Best-Selling book, The Best of Bert Norman!

Bert was brilliant at eliminating non-contenders, and when you can do that for two races in a row, that considerably enhances your chances of hitting the Daily Double.

That’s the principle Bert has working here, and not only will you hit close to 38% of the DDs you play, but often, especially in the bigger fields, you will hit some great, great payoffs!

Bert’s philosophy was ‘bet a little to win a lot’, and the Monster Daily Double System! offers you several opportunities to accomplish that Daily!!

The Monster Daily Double System, which was created by Bert Norman, is designed to locate runners who have the least negative traits and display them onscreen as the Daily Double contenders in each race.

Look at the following sequence: 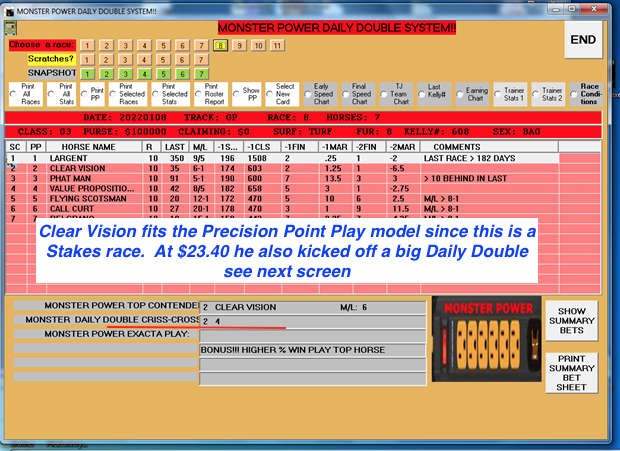 Clear Vision is the top pick, #s 2 and 4 are the Daily Double Contenders 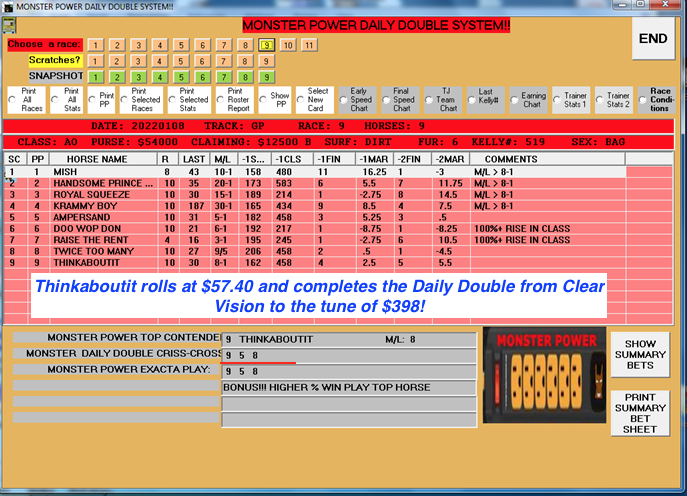 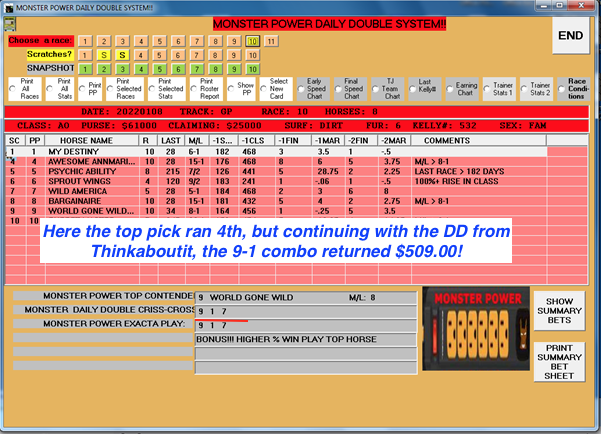 In the next race the #1, who was one of the DD contenders, won and the Double paid $509

So the basic strategy is pretty simple – you take the Monster Daily Double Criss-Cross horses and criss-cross with the contenders in the next race.   The main thing you want to make sure of is that there is some value in the potential Double payoffs, so if one or both races have contenders that are mostly short prices it may be best to pass.  It is definitely not uncommon to hit three or more Daily Doubles on an average racecard.  While most DD payoffs will be more modest than the example above, the fact is that you will hit Triple Digit payoffs fairly often.  And, all the work is already done for you!

This was a late discovery by Len when he was going over the DD data. He found that the top selection (horse in the Monster Power Top Contender box at the bottom of the screen) showed profits when played in certain situations.  Here is where playing the top picks showed profits over the database study:

While all top scorers are worth a serious look for win place and show, the idea is to concentrate on the top scorer in these categories.  Double Digit prices are also very common,

So now you have a single software program that calculates lucrative Daily Double payoffs, and also shows you where the Top Scorer wins often enough and at a good enough price (Categories) to show a long-term Profit!

And we have maintained the $68 Retail price for the software, which we advertised in the Pre-Sale, even after Len added his PPP plays, so The Monster DD Software becomes an extraordinary bargain!

*****And remember, we offered this software for FREE!! for purchasers of our new IOTC, 2022, and you can still get that deal  –  Link below.