Exotics Buster II takes much of the guesswork out of playing some of the most profitable types of wagers at the track, i.e., Pick 3s & Pick 4s

(Daily Doubles, by the way, also often pay big overlays, largely because the crowds nowadays ignore what they consider an ‘old-fashioned bet’).

And  EB II’s unique selection ‘engine’, which we call the

is designed to provide the user with the most likely contenders, which often include price horses, in any series of races.

by showing you the selections in upcoming races, allowing you to construct your ticket accordingly.

Below is an example of how Exotics Buster II projects likely results by displaying the contenders in upcoming races.  A day like this is not a ‘flash in the pan’.  It is typical of the type of results you will get at tracks nationwide. 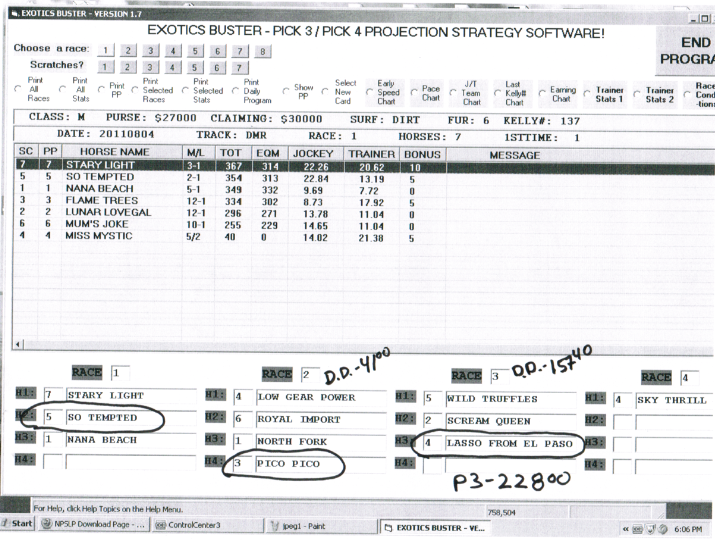 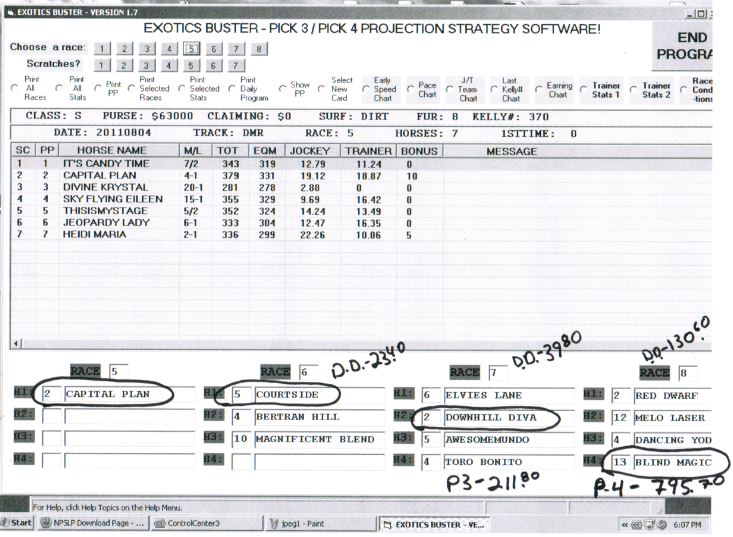 You can see that on this day the program caught the first Pick 3 of the day as well as the first two Daily Doubles.

The program did not have the winner of the 4th race, but picked it up again in the 5th.

Below examples from the 6th and 7th of August at Saratoga.  Lest you think that EB II picks just shorter priced horses, that is hardly the case.

On the 7th note that Beautifulnightmare was a ‘single’ in the 4th race and paid $25.20 to win! 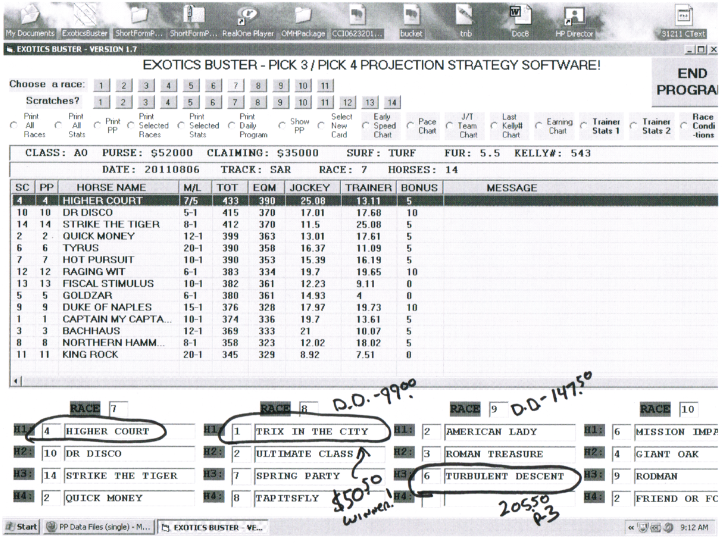 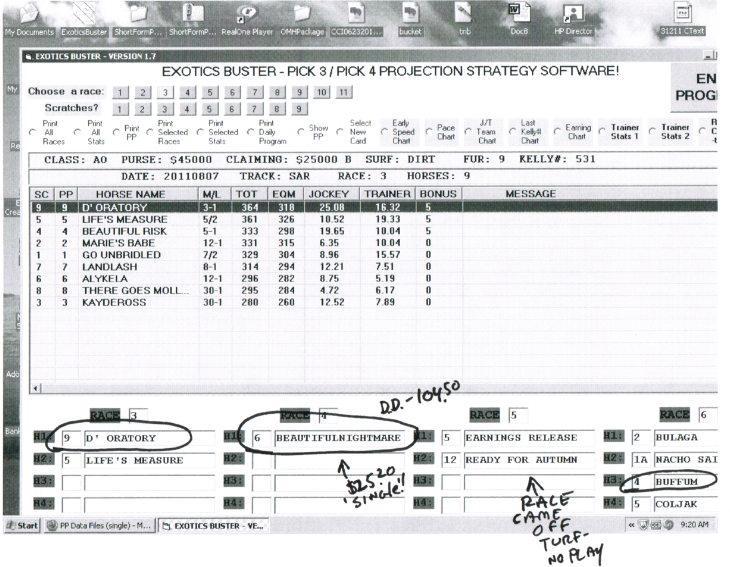 Want more?  Take a look at this (below).  On the August 12 Saratoga card, Exotics Buster II had seven out of nine winners —

seven in a row (races 2 thru eight) and several at very nice prices, all among the top two contenders (including a $10 ‘single’).

Not only did the program pick several

some at modest prices, some at nice prices,

albeit the P6 ticket using all the contenders would have cost $396).

Had Hoopskirt held off the winner of the 9th, a $24,000 payoff would have been our reward.

This is seriously good stuff folks.  And as you can see, you can even use EB II to pick good to great-priced winners.  We’ve included a more in-depth discussion of why every horseplayer should be making these types of exotic wagers. 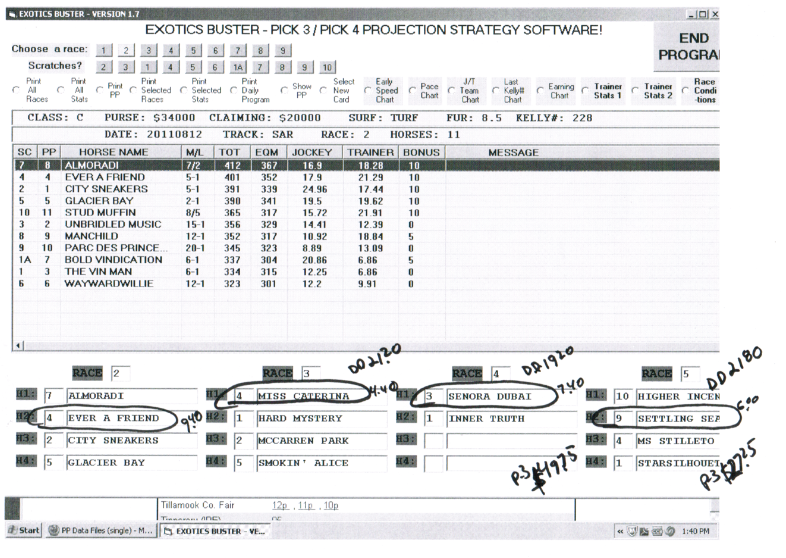 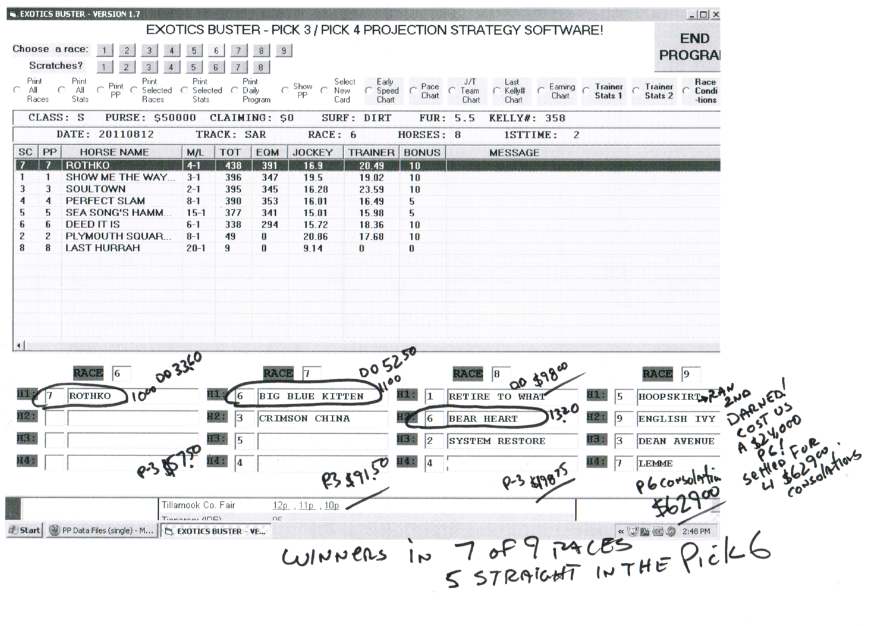 No one who hopes to make a profit at this game will ever do so by wagering on propositions that offer less than fair value.

Go ahead and play the 4-to-5 shots to ‘show’ all day long. Oh, you’ll cash plenty of tickets, and if that is your only purpose, fine.

But you are going to lose your little behind following this type of strategy, and you’ll lose it fast!

The only way to succeed in this game – the only way I and my compatriots succeed at this game, is to search out value. We only want to bet in situations where we feel we are being paid fair value or more.

When we’re talking win and place betting, and you have the ability to estimate the chances of each animal in a race, you are able to construct a simple odds-line and thus easily spot your overlays and underlays.

When we’re talking exotic bets, the task becomes more difficult. In his Money Secrets At The Racetrack, Barry Meadow lays out some excellent ways to determine value on Exactas, Trifectas, Triples, even the Pick Six.

However, after years of making the wagers, I’ve decided that the Pick 3 is what I call a ‘natural’ overlay.

Very simply, I have found that #1) There exists a huge amount of ignorance where this bet is concerned, and

#2) Most of the players are keying the favorites heavily in the Pick 3 pools. This results in a natural tendency for the wager to almost always result in a payoff that is overlaid.

The reasons? Because an ignorant public has no idea of how to correctly play the bet, and therefore probably lose about 19 of of 20 Triples they play, and, since the favorite doesn’t win every race, the payoff will naturally be larger than if it did.

Sit down and figure just how much of an overlay the Triple is at your track.

At this moment, I’m going to grab a results chart out of the pile. I’m going to put my finger down on a race, and that’s the Triple I’ll figure for its ‘overlay’ value. I do this by determining what a three-horse parlay would pay in the same three races.

You’ll find that the example above is actually less than typical. The overlay is usually even greater – sometimes more than twice as much as a parlay would pay!

That’s why the Pick 3 wager is the serious handicapper’s best friend.

Value and overlays are the name of the game, and you get both with this wonderful betting proposition.

Now we’re by no means advocating leaving the favorite out of the equation all or even most of the time, because obviously a lot of Pick 3’s will contain at least one leg that is won by the chalk.

The truest and biggest overlays will come when a heavy favorite fails to get the job done, though, and we’ll expand on this discussion later on.

So now we know why it makes sense to make the Pick 3 an integral part of your betting itinerary.

But how do we play it so we can insure receiving maximum value for each dollar wagered?

I’m going to share with you the strategies that have been successful for myself and my betting syndicate.

And they are all contained in the Exotics Buster II Software!

Thanks to the unique EQM (Equine Quantum Multiplier), which Len ingeniously incorported into the program,

the software contains all of the selection strategies and all of the ticket-building strategies that my partners and I have used successfully for years now.

The software does all the work, all the selections, all the strategies for you.

In addition, of course, the program provides you with the usual features – trainer stats, charts, free daily program,

And it does an excellent job of doing just that.  And, it is price very reasonably, for the next 11 days only, at $147.

And, of course, if you don’t like it, for any reason, you can always send it back for a full refund.

You now have, at your fingertips, a tool that handicappers have longed for for years.

You will now be able to bet with confidence on Exotic wagers that you likely would have previously passed up.

Most ticket costs are very modest to boot.

Check it out – you won’t be sorry and, of course, you have full technical support from us!