The Magic 30 actually has a bit of ‘magic’ to it, in that the formulation does not follow logic, but it does produce some marvelous mutuels.

Editor’s Note:  What if you were privy to many, if not most, of the best mechanical methods of profitable racetrack play in existence?  And, what if these came to you from authors and players who have been using these methods to produce decent profits, i.e., a supplemental income for years?  Well, lucky for us, we are in just such a position.  As the world’s largest distributor of quality handicapping products, we get dozens of products through the mail from players asking us to evaluate and/or market their systems and methods.  And while the vast majority, though well intentioned, do not pan out, every once in awhile we come upon some real beauties.
And we are featuring three of these methodologies here.

**The Magic 30 actually has a bit of ‘magic’ to it, in that the formulation does not follow logic, but it does produce some marvelous mutuels.  **The Positive ROI Winning Favorite Method is ridiculously simple, but does produce profits betting only on favorites.  And our good friend, Mad Man Ivan, shows us a longshot method that has produced a +57% Positive ROI over the past 30 years.

What these systems have in common is:

1) Each one tested long-term profitable in our database.

2) They are some of the quickest and simplest profit-makers we have ever evaluated.

3) Each has just two or three rules to follow – you can literally find plays on an entire card in less than two minutes.

4) They bring great enjoyment to a day at the races, as you will be cashing frequently, often at a hefty mutuel

We have provided brief descriptions of each method below.  And the package is priced very reasonably, just $39.88 for the ebook or $45.88 for the hard copy.  You’ll get a kick out of these, we promise!  More below. 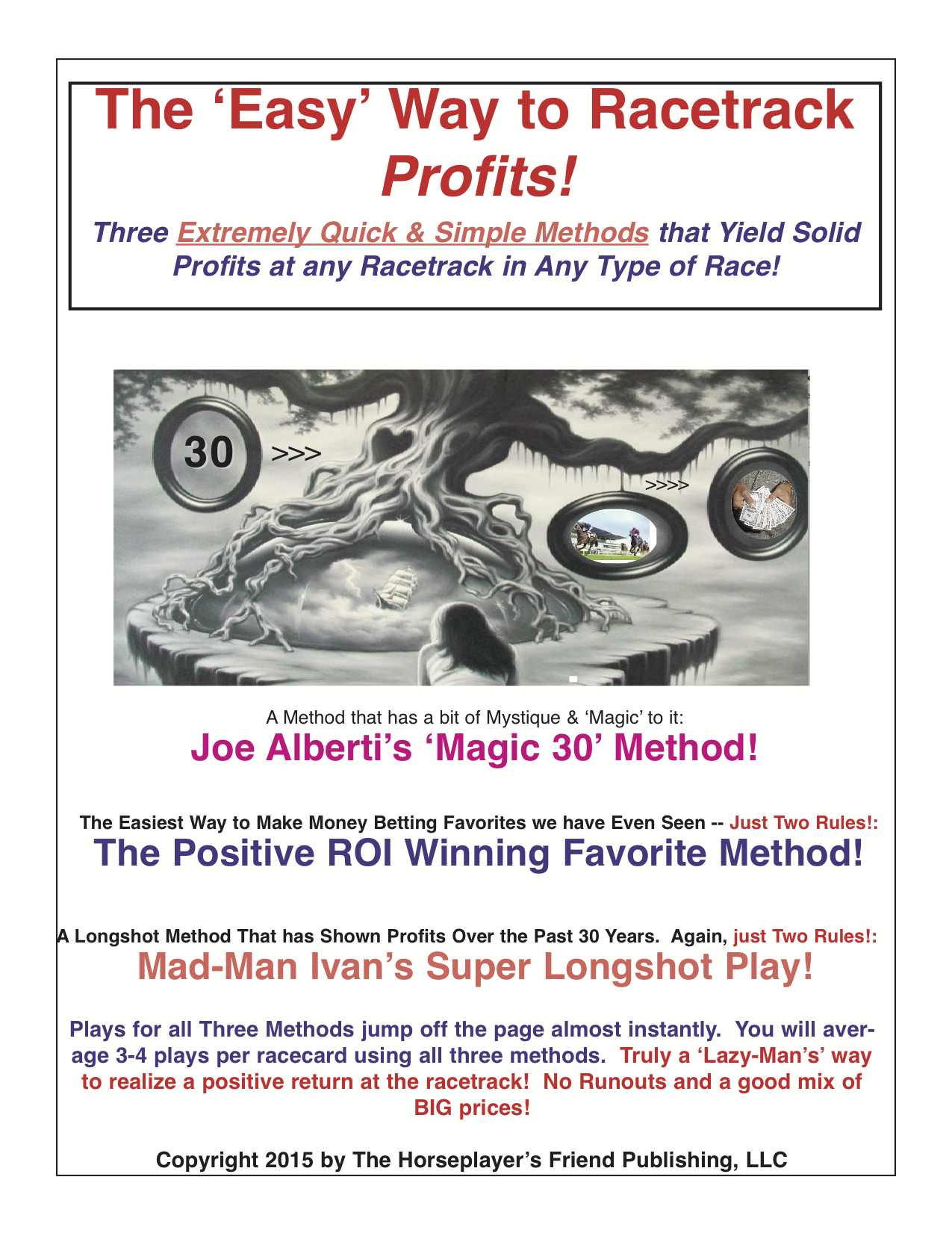 Here’s A Summary Description of What The Three Methods are all About:

Magic 30: A long time ago, when Ozzie & Harriet was one of the top-rated shows on the ‘tube’, 1955 to be exact, Joe Alberti was enjoying a day at Santa Anita.  He had recently sold his bar in New York, which was directly across from the CBS studios and catered to many a star, and was now a man of ‘leisure’, so to speak.

On this particular day he sat next to a young couple and heard the following conversation:

“I want to have a real happy birthday”, the girl said.  “Find me a winner!”  Her husband was studying the Form intensely and suddenly said “Here!, this one fits the pattern.”  He then explained why he liked the horse and set off for the window.  “I’ll put $10 on it for you.”

As the fellow weaved his way through the crowd back to his seat the horses left the gate.  In his absence Joe had jokingly told the girl good luck, because she would need it on the plug her hubby just bet on.  But the birthday-girl had the last laugh, as her horse got up in the final jump to pay $44.

Joe, a bit stunned, congratulated the couple.  “Thanks!”, the husband said, “we’re leaving winners.  C’mon hon, I’m taking you out to the best birthday dinner you’ve ever had!”

Two races later, Joe noticed a horse that fit the same pattern as described by the fellow who had tabbed the $44 horse.  Joe just sat out the race but couldn’t believe his eyes when that horse also won and paid $18.80!

So Joe, who likes nothing better than to peruse through old Racing Forms and research angles, went home that night and started a serious study on the method the young man at the track was using.

Even though the rules seemed a bit illogical, Joe was surprised to find a win rate of over 34% with an average mutuel close to $10.

“I thought, what the heck, if this thing is showing me a profit on over a thousand-some-odd races I’ve tested, I’m just going to look for it everyday at the track and lay a saw-buck or three on every play!” Joe told us.

Well, it’s been 45 years since Joe first started playing the ‘Magic 30’ Method, as he named it, and he’s still playing it with profitable results today.

“It took me awhile to realize that there was a logic to this method”, says Joe.  “The horses you are playing are obviously sharp and well-regarded.  What surprises me to this day is how often these horses get off at a price.”

The Positive ROI Winning Favorite Method:  Many systems over the years have started with the premise that since the favorite wins @33% of the time, there must be a logical way to isolate favorites that win more frequently than that.  The Racetrack Millionaire and SuperChalk, which many of you own, are perfect examples of systems that make money concentrating on favorites.

The major argument against this type of system is that you don’t get many plays and the prices are always short.  But hey, do you want action or do you want to make money?  I’ll take the latter over the former any day.

Here’s another nifty little method that concentrates only on favorites who have a better than average chance of winning.  It was submitted by a lady from the Detroit area, who has been using it to pay her miscellaneous household expenses since the early 60’s.  Since simulcasting has come into being she does even better, she tells us, as she’s able to play several tracks each day.

We ran a decent-sized test on The Winning Favorite Method  (1,870 races) and came up with 42.3% winners at an average mutuel of $5.29 for an 11.6% positive ROI.  The profits can be improved by using a simple percentage-of-bankroll method.  The rules are extremely simple, and it takes only minutes to go through a complete card.  Runouts are very brief.  Six is the longest we encountered in our test.

Mad-Man Ivan’s Super Longshot Play:  We met Ivan Silber shortly after he first subscribed to our newletter, The California Handicapper.  We can honestly say that we have never seen a wilder bettor.  In fact, his friends call him ‘Wild-Man’.  We were there one day when he was hitting everything (he bets mostly exotics) and left the track with a $48,000+ profit.  And we’ve seen him drop several thousand dollars on other days.  Overall, he comes out a solid winner, and we know of few folks who have the intestinal fortitude to stomach the wild swings his bankroll experiences.

When Ivan read about The Racetrack Millionaire and saw that it had been published in the early 50’s, he called to tell us of a longshot angle he had used successfully since the mid-1960’s.  He tells us he caught a $321 horse with this angle once, and had probably hit 10 or more $100+ winners.  The angle is a long-term winner and is certainly worth following.

Seriously, give these methods a try.  You can just play them ‘on the side’, so to speak, since they are so darned simple, and do your other racetrack maneuvers at the same time.

And you have absolutely nothing to lose.  If you don’t like them, we refund your purchase price – it’s that simple.

Have fun with these!!