Background – this is a fascinatingly good read!

In Southern California, during the final couple of decades prior to the millenium, when it was the only game in town (no casinos, no sports betting), it was very common (almost daily) to see the same three gentlemen, usually in the Clubhouse, but often on the tarmac in front of the wire, in deep study over the Racing Form.

Two of the gentlemen were of medium height with graying hair, while the other was a tall, swarthy fellow who looked like like he was fresh off a Hollywood movie set.

While many fans of the game would perhaps wonder how Bert, a genius system creator, was a ‘fit’ with the other two, a famous book author and one of the first developers of pace-based computer software, as it turns out, the other two relied more on Bert’s expertise than their own. 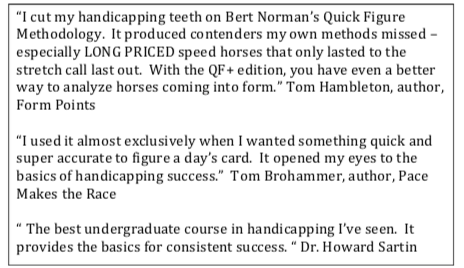 Bert, you see, didn’t believe in complexity, and exotic pace-line formulations, etc.  He was truly an old-fashioned ‘seat of the pants’ type of player, who relied heavily on information from the same pps that were staring everyone else in the face  —  😎he just saw 👁them in a different way.

Quoting Bert, ‘I was always good at mathematics and thus, at ‘logic’.  When I look at the past performances it’s like a jigsaw puzzle completing itself right before my eyes.  I know almost immediately who the main contender(s) are, the likely pace scenario and the top jock/trainer teams.

‘I also have a knack to know, almost immediately, if a race is playable or not.  I initially assumed everyone could see the same numbers, or combinations thereof, that I was looking at – but after seeing so many of my picks go off at big odds, when I thought they should be among the favorites, I realized I might indeed have been bestowed with a bit of ‘gift’ where the ponies were concerned.’

When Bert’s ‘The Best of Bert Norman – Secrets of a Professional Handicapper’ was released in 1994, it flew off the shelves and Bert had to do four additional printings.  This book contained several of Bert’s best angles,

Here’s a quick look at Bert’s Intro page which perfectly describes Bert’s philosophy, which is to help all players become winning players – and if you are a Bert Norman fan, you know that he accomplished just that with the likes of his Quick Figure +, Speed Key, Early Speed Longshot, etc. 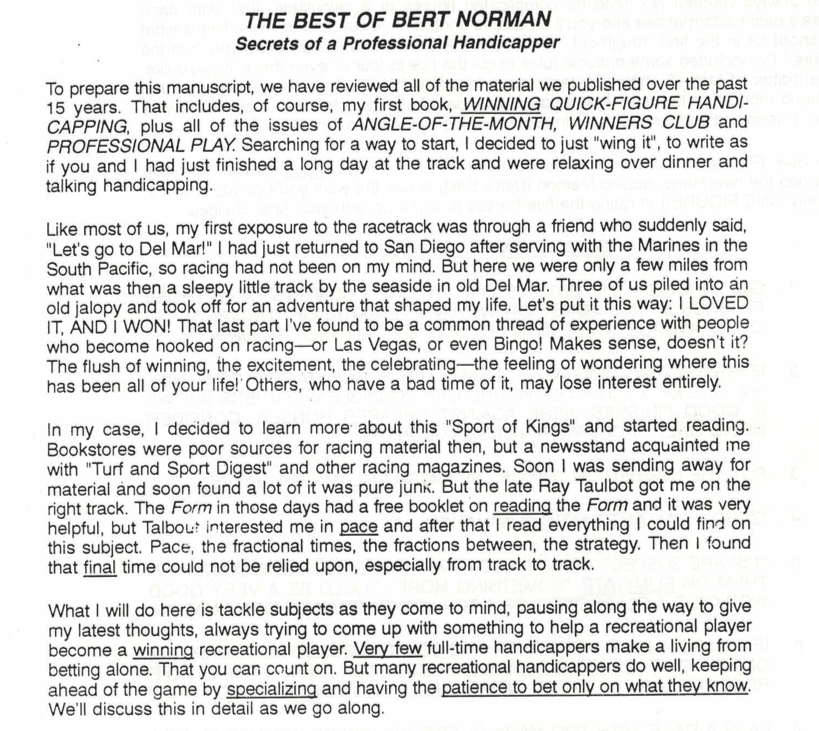 check out the price on Amazon!

But we have the book and are offering it at a much, much, much more reasonable price and, since a good measure of what is in the software came from this volume, 👉😃😃you will receive Bert’s book Free with your purchase of the software!

there is one angle that he did not include — he called it his ‘Personal Best’ and was reluctant to market it.

Unfortunately, Bert suffered some health setbacks in the early 2000s and it was never published.

But recently, through an old and reliable publishing contact, we obtained a copy and now have the rights to release it: 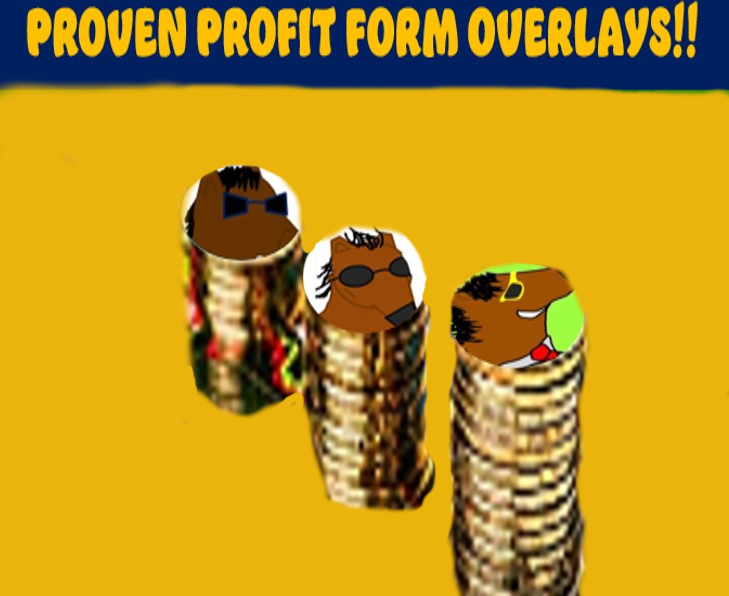 and you are going to Love It!😎😎

What Burt has done here is woven several of his positive ROI methods into one very consistent and high average win mutuel methodology/software.

👉👉Average Win Mutuel on Best Bets is in the $9.50 range with a win rate close to 31% producing an enticing ROI in the 45% range.  Also, contenders very often hit the board, so plays can be used with success in Exactas, Trifectas, Supers, etc.

“I am so thankful that you were able to obtain this material and actually program it.  I’m having so much fun using this software — I don’t tell my friends what I am using and they think I’m this great handicapper when I come up with all these double digit payoffs.  Bert’s stuff is timeless.  Works on any track, any surface, any class.  Thanks again!”  Ben Ruffield, Dallas, TX

“This software has been a real hoot!  I keep thinking all of these nice prices are going to suddenly stop, but they simply don’t!  The fact that it also picks lower priced horses consistently as well, and is really good when a pick is the morning line favorite (winning close to 45% of the time), makes my horse betting regimen so much easier.  Another great job guys!”  Bill Woolins, Brooklyn, NY

The reason the average win mutuel is so high is because PPFO consistently pops with double-digit overlays.  Bert’s primary philosophy was locating solid, in-form horses that ran ‘better than looked’ in recent races, due to trouble, wrong distance, wrong surface, etc.

While there were quite a few fields to program, Len made the main screen look very simple so he didn’t have to draw out 20-odd columns.  Working in the background are pieces of Quick Figure, Quick Figure+, Speed Key, NLL (New Lower Level), The Experienced Maiden, Maidens at Odds, Private Play Winners Club, and several others. 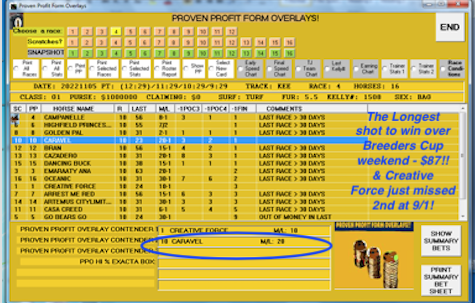 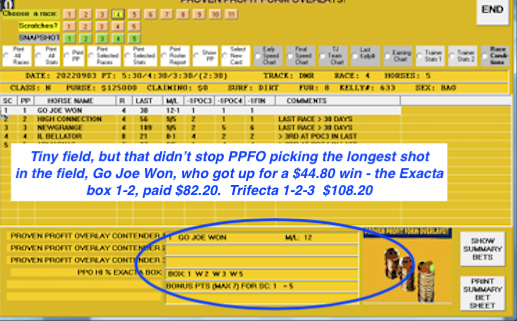 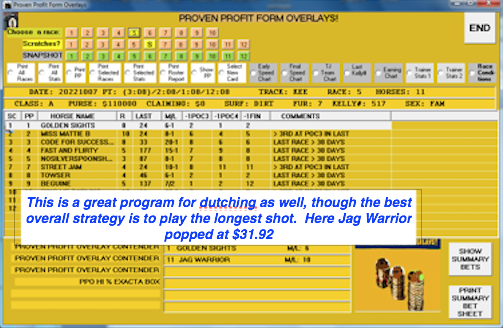 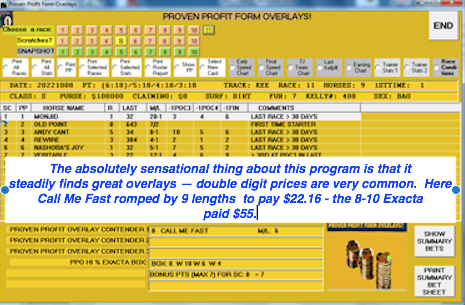 Look at the Exacta Payoff below — a 68/1 contender ran 2nd!  You will get a large number of high odds horses that will run in the Exacta, Trifecta, Superfecta, etc.  This was on the same card where Joe Go Won (above) paid $44. 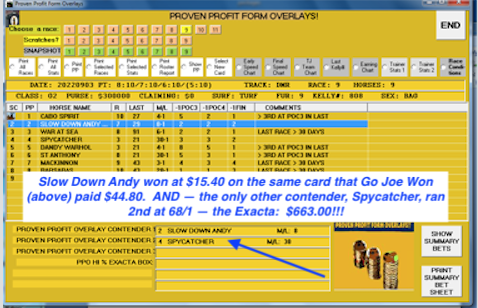 Note:  The examples below were printed before we changed the on-screen cosmetics to appear as the examples above – we gave it a little ‘cleaner’, easier to read look in the final version. 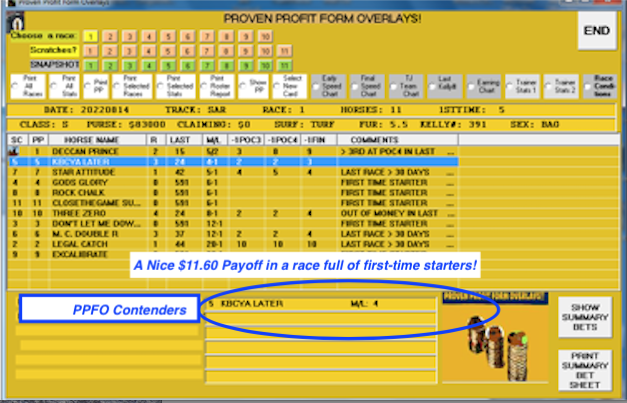 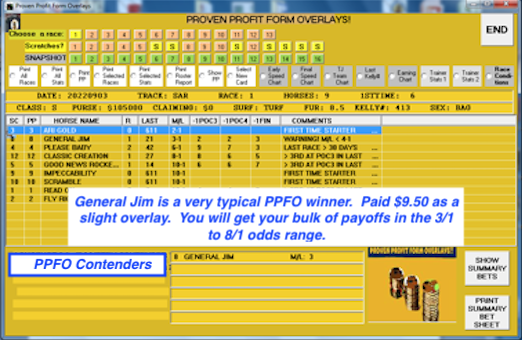 The Belmont at the Big A meet has produced super consistency as well as some real nice prices. 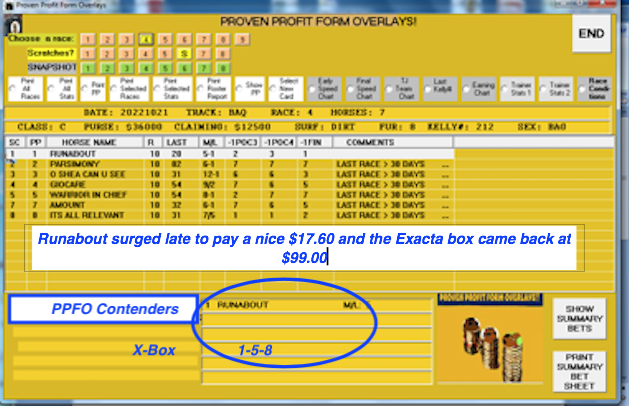 While PPFO is great with overlays and big prices, it is also very good with favorites.  When a morning line favorite is also a top pick, the win rate is in the 43% to 48% range depending on the track.  In fact, over the 27th and 28th here at Belmont at Big A, three horses fit that scenario and all three won — Dont Lose Cruz (below)  returned $5.20, the other two paid $4.80 and $3.20.  Never leave a horse with this pattern out of your exotic wagers — they are great for ‘singling’ in Pick 3s, 4s, etc. 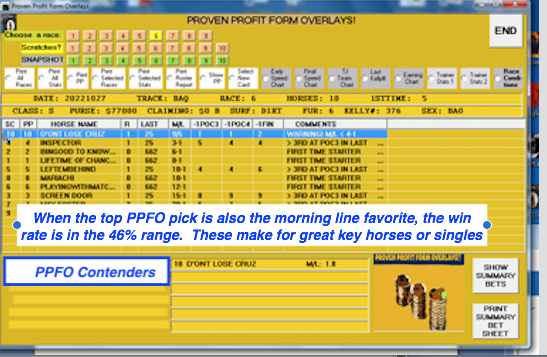 Proven Profit Form Overlays! will make a great addition to your handicapping arsenal.  Big prices, moderate prices, a high hit rate with favorites, an exacta equation that often returns triple digits, works at all tracks and on all surfaces, accurate with Maiden races, etc. –  all of this in one great Package!

>>>And when you purchase the software, you will also receive the Best Of Bert Norman! book, or ebook, at no extra charge.  This is a book that sells for hundreds of dollars on the Internet, when you can get one, and is a great read and education for players at any level of the game,  but it is yours FREE!!  And, Heck, if you are not really into books, you can just sell it!